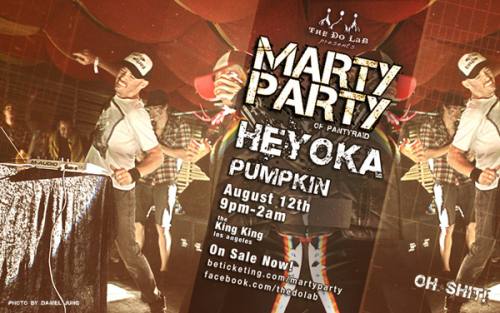 This one is for all of you who seriously love the crunkalicious basslines, the sexy glitches, and the body moving melodies of our WestCoast sound!
MartyParty & Heyoka are going to blow the roof off the King King Thursday August 12th! Along with a special opening set by the feelgood kid himself, Pumpkin, we suggest you bring your best dance moves because it's going to be an unforgettable night!
To purchase advanced tickets visit: http://beticketing.com/martyparty
-- The Line Up --
*MARTYPARTY*
Marty Folb aka MartyParty - Born and raised in South Africa, found his way to San Francisco 15 years ago as a software programmer. After discovering the music of the west coast and wanting to “Africanize” it, Marty picked up Ableton Live and began to learn the art of music production in 2007. He soon after released his first digital album "Walkerville to the West Coast", named for the town he grew up in and a tribute to his path to the US. Marty got tired of how all electronic music followed the same formula so he set off on a mission to re-invent electronic music and cross-pollinate it with all the other music he loves. Marty's production can best be defined as IDM based hip-hop for lack of a better term. Marty started a movement back towards the power of the melody and instrumental composition.
Song writing has always been Marty's passion instead of the typical beat style dj production. The music is a hybrid of electronic music and hip hop that together forms a totally new flavor of urban beat with the pretty hypnotic elements of electronic music and hard-hitting bass.
The MartyParty live performance is an intense journey that pulls together gorgeous instrumental, bass heavy songs, and overlays these with acapella and samples played live. The result is a true “crunky” and "hyphy" experience like no other. Marty has been playing his live sets to crowds all over the US.
http://www.martyparty.org/
*HEYOKA*
Heyoka AKA Andrei Olenev is another cosmic auditory scientist found in the Bay Area noosphere, who has been blowing minds with his auditory manipulations. His early influences in Downtempo, Dub and IDM combined with more recent midtempo dancefloor genres have helped create a very unique sound that combines relentless basslines, hip hop and dub rhythms with a lot of musicality and melody.
The response to his emergence so far has been overwhelming with Heyoka developing audiences and playing festivals from US to Canada and Australia inspiring a mind bending experience in dub inspired Glitch Hop. He is a producer consistently evolving his sound while managing to maintain a signature sound that is distinctively ‘Heyoka’.
http://www.myspace.com/andreism
*PUMPKIN*
Pumpkin (formerly known in the underground DJ world as Nick the Neck) is the producer and music curator behind the Wandering Marionettes and their eclectic monthly event, Kabinet Theatre, as well as member of the famed Los Angeles DJ collective POCKET Underground. While his production style is often dark and cinematic, his DJ style is a melange of dubby tech-house, downtempo, trip-hop and alt-indie remixes. Tactfully walking the thin line between hip-grinding rhythms and bittersweet lyrical melodies, Pumpkin truly loves every song he shares with the dancefloor.
http://www.myspace.com/pumpkinsounds
-- This show is presented by The Do LaB --
Based in Downtown Los Angeles, The Do LaB is an ensemble cast of creatives ranging from artists, event producers, lighting designers, DJs, constructors, welders, costumers, musicians, and the performance troupe Lucent Dossier.
Since 2000, The Do LaB has been dedicated to treating experience itself as the art form. Their exceptional annual events–including the Lighting in a Bottle Music Festival–and jaw-dropping, large-scale art environments, have been attracting a devoted following among the West Coast’s underground creative community, and around the world. While bringing the visions of their home-grown art collective to life, The Do LaB has evolved into a respected event creations company, winning over major brands, music festivals, and trade-shows, with their unparalleled creativity and innovation.