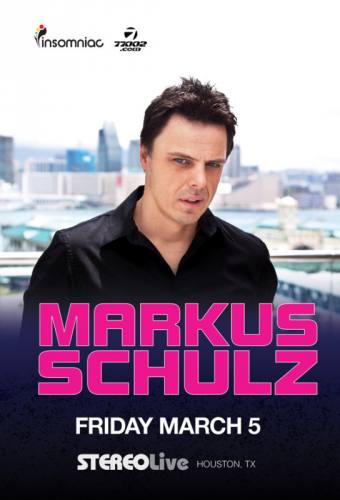 Markus Schulz:
Deep, Dark, Melodic, Markus Schulz's music will bring out a musical side of you, you never knew you had. From the time you set foot on the dance floor until the time he leaves the decks, you will become one with the music. Markus will reach into your soul and let you know why Dance Music is the greatest music the earth has known.
77002.com and Insomniac Present
Markus Schulz at Stereo Live
Voted the #8 Best DJ in the World by http://www.djmag.com/top100
w/ Special Guest Alex C. and Nabiya de Grace
Funk Lab Patio:
$10 Tickets to First 50 Purchasers
Watch Markus Schulz Rediculous Video Release "The New World"
http://www.youtube.com/watch?v=BMTK8OiUWIg
About Markus Schulz
Over the last 10 years Markus Schulz has fused the individual musical identities of progressive house & trance into his own creative, inimitable hybrid sound. Through the unique alignment of his headline DJ sets, Coldharbour label output and highly prominent Global DJ Broadcast show, he orchestrated a sea change revolution in the US trance scene - one that has gone on to have its sound influence sweep to the farthest reaches of the globe. This success has been singularly reflected in weekly headliner sets in front of many tens of thousands, a GDJB radio show listenership up in the tens of millions & one Beatport chart-topping release after another. Following several highly ranked positions in 2008 Shultz punched his way into the Top 10 of DJ Magazine’s Top 100 chart, landing at no.8. In repeating the exact same achievement in 2009, he now stands, quite unequivocally, as America’s no.1 club DJ.
http://www.markusschulz.com/index.php
Website:
http://www.77002.com
Videos of Events:
http://www.youtube.com/77002com
MySpace:
http://www.myspace.com/77002NightCulture
Facebook:
http://www.facebook.com/home.php#/gr...id=35838333019
Event Info to your Cell Phone:
Text DANCE to 313131