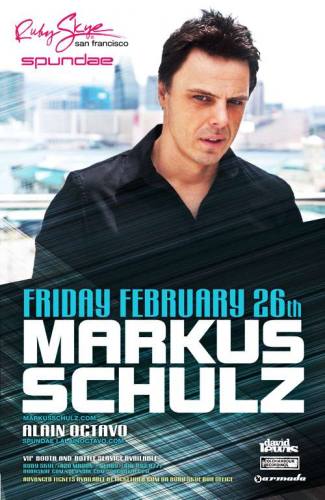 Markus’ reputation as one of the global leaders in production as well as a world renowned DJ is supported by the rise of his own label Coldharbour Recordings. Delivering a plethora of A-List releases, the imprint acts as a platform for Schulz as well as up andfor up and coming artists, something Markus is passionate about. Largely inspired by his travels and the people he has met, his unrivalled discography incorporates numerous solo, collaborative and remix projects that form the foundations of his success. Investing whole hearted passion into every aspect of his work, Markusconsistently delivers hit after hit, most notably with 'I Am' / 'Daydream' feat Andy Moor, a staple in many a DJ box.2009 was set alight with the formidable smash ‘The New World’, which set the tempo for the whole year and preceded Toronto ’09, the latest edition in Schulz’ epic world compilation series. Following on from the phenomenal success of Miami ’05, Ibiza ’06 andAmsterdam ’08, Markus progressed his city inspired series to deliver us another exhilarating journey through trance from a revelersperspective. His production talents didn’t go unnoticed by the music establishment, a nomination for Best Full Length DJ Mix for the previous mix, Amsterdam ’08, at the IDMA’s swiftly followed. This proved only a dip in the water as Markus scooped Best American DJ onthe same night, not only re-affirming the popularity he has within his homeland but also on a global scale.A monumental return to Schulz’ formidable Dakota project proved to be one of the highlights of the year for the man himself and many fans who have waited for nearly seven years to re-acquaint themselves with the darker, moodier and deeper side of thelegendary producer. ‘Thoughts Become Things’ satisfied trance, house and techno fans the world over and forced Dakota backonto the lips of the electronic music masses with overwhelming success. The latter end of 2009 showed no signs of his relentless production schedule slowing down, the release of ‘Markus Schulz WorldTour: Best of 2009’ not only broke boundaries when it comes to compilation construction but re-enforced Schulz’ attention to detailand forward thinking.
At a time when the traditional format of compilation cd’s are becoming tiresome, Markus endeavored to offer his fans somethingalternative; the result, a mix that blended recordings from his world tour, including revelers joyful cries, into an epic journey acrossthe globe, taking in eleven cities on route and resulting in a truly mammoth production masterpiece. With his popularity is at an all time high, but not one to rest on past successes; a determination, an appreciation of his fans supportand drive to push boundaries within the Miami-based star is what puts him at the front of the leading pack; placing Markus as oneof THE force’s to be reckoned with in dance music.