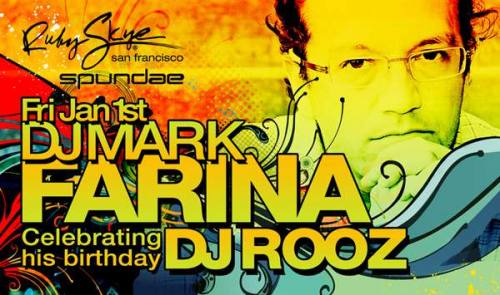 Mark Farina, along with partner, and then manager, Patty Ryan-Smith created, the now legendary weekly club, Mushroom Jazz, in 1992. Every Monday night the crowd slowly germinated – from 100 for the first few months to 600-700 two years later. Simultaneously, the Mushroom Jazz tape series evolved – from the first Chicago run of 50 copies each on to the next stage, where 500 copies of several volumes were easily distributed. As time passed, Farina and Patty put their energies into another project, the first Mushroom Jazz interactive CD-ROM. After a three year run, where the club had established a fanatical, cult-like following for Farina and the Mushroom Jazz sound, the club closed its doors and transformed into a CD series and accompanying tours.
Since 1989, Mark Farina has been traveling the globe performing at literally hundreds of shows a year, sometimes DJing both of his preferred styles in two different rooms at the same party. At other events, he’s been known to play extended sets that lasted over eight hours. In his House sets, Mark is known for his uniquely effortless journeys on the jazzy side of Chicago House, mixed up San Fran style, and flawless as always.
This wandering record minstrel has played in front of some fairly amazing backdrops. The ACA-Sound Festival in Acapulco is one example, where the event organizers cleared a huge piece of land and brought in the world’s finest DJs. Farina joined Carl Cox, Moby, the Chemical Brothers and LTJ Bukem in the Mexican paradise.