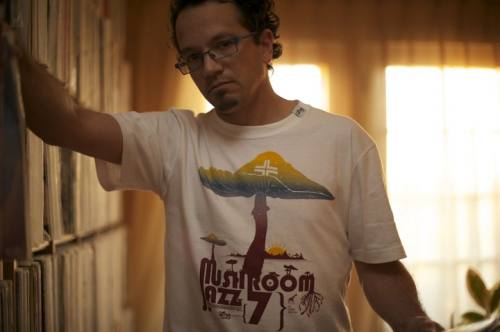 Shortly after Mark befriended Derrick Carter in 1988 at a record store in Chicago, his passion for House music, and sharing it with the world, exploded. Mark experimented with a deeper style, dropping De La Soul, disco classics and other stuff that wasn’t being played in the main rooms of nightclubs. While exploring his love for the purist forms of House Music, Mark developed his trademark style: Mushroom Jazz; acid jazz infused with the West Coast’s jazzy, organic productions along with urban beats. Fans embraced Mark’s downtempo style so much that he started a weekly Mushroom Jazz club night in San Francisco with Patty Ryan. In 3 short years, the club established a fanatical, cult-like following for Farina and the Mushroom Jazz sound. When the doors closed, Farina continued the tradition by releasing a series of Cds, “Mushroom Jazz”. Since then, Mark has been traveling the globe performing 100s of shows, to over one million club goers, a year. His House sets take fans on journeys to the jazzy side of Chicago House mixed San Fran style. Some of these sets have been known to last up to 8 hours. And sometimes you’ll find Mark playing in two different rooms at the same party, showcasing his range of rocking the big room sound to the uber-chill. Farina’s taste making skills continue to turn the heads of crowds worldwide and consistently draw new fans to his style of chunky–funky rhythms and deep underground house. URB, MUZIK and BPM Magazines have all had him on their Top DJ’s In The World lists.

Hailing from Nashville Wattie Green has certainly made an impact on the global House community. His debut release on Flapjack titled 'Bashville, TN EP' was a little more than well received and catapulted him from an basic unknown to House hold name from one minute to the next. While enjoying a seemingly over night success Wattie continues to create music that has been championed by top shelf record labels and djs alike. With a slew of fallow up releases on Flapjack & Spatula City out of Chicago his popularity has reached unimaginable heights and continues to grow with upcoming projects on Skeet Traxx, Juiced and many more. Make no mistake, his presence on this stage is a gift!

The Warm Up Provided By:

A trio of Memphis' finest to get the night started properly! These guys really stole the show at their last event featuring Da Sunlounge. Expect them to set the bar high once more with another solid performance.