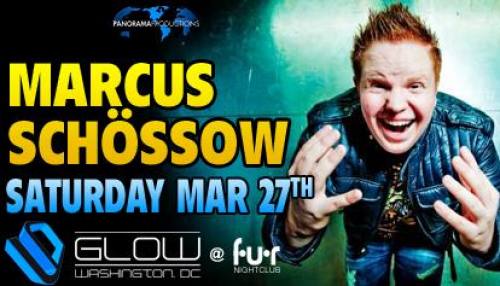 MARCUS SCHÖSSOW - Sweden
Opening set
RICH WEBB
(GLOW-DC)
Schossow is a very rare individual. He shines at whatever he throws his hand to, and whether that’s performing to thousands or producing for the masses – he’s on a mission to reinvent dance music, and he’s off to a flying start! This reinvention started with his smash 2007 track Mr White, whereby fusing futuristic techno, with filthy house and a subtle smattering of trance; his sound automatically became appealing to a whole host of DJs and music fans alike. Marcus is part of a hot, new, elite set of young DJs and producers with dance floors around the world clamoring for his infectious presence and prodigious mixing. Progresia and Tone Diary, his own projects, are establishing the ‘Schossow Sound’ while his work with fellow producer Thomas Sagstad has seen Tiesto, Axwell and Steve Lawler snapping up tracks like Hypnotizer and Crepusculo. World-renowned Dutch outfit Spinnin have given Schossow their full backing, making him their youngest signing to date. At only 22, Schossow is a serious force to be reckoned with. Further support comes from the A list including Pete Tong, Armin Van Buuren, Steve Angelo and Sander van Doorn, underlining Marcus’ increasing influence in the world of dance. And it’s not just his ability as a producer that screams ‘watch this person’. Schossow is in demand around the world! America, Europe, the Far East and beyond are all calling out for gaps in his diary. In the short time Marcus has been around, he’s already clocked up some of the biggest gigs in the calendar: Dance Valley, Godskitchen , Sunrise Festival, Escape Into the Park, Zurich’s Street Parade and the Colours Festival are just some! With Tone Diary, Marcus’ acclaimed radio show; the sound of Schossow travels even further. Setting the airwaves ablaze, he reaches those not lucky enough to have caught him live yet and reminds those who have of why they’ll have to check him out again! Yet with all this, it’s so easy to forget that Marcus Schossow is just 22 years old. A young man who is only just starting out at what looks set to be a very prosperous musical career. More beckons as 2008 propels past the half way mark and for Marcus Schossow this is only just the beginning…
-The Main Room (House-Progressive-Trance)
-The Martini Room (Hip Hop-Old School, R&B)
-The Mink Room (Mashups, Hiphop, Top40)
-The Mafia Room (Latin Music)
-Outdoor Patio (Smoking Allowed)
GLOW happens Saturdays at Fur Nightclub – Ages 18+
33 Patterson St. NE Washington DC 20002
Web & tickets: www.ClubGlow.com // Info: 202-271-1171
Myspace.com/clubglowdc // Facebook: Glow Fan Page // Twitter: ClubGlow
BECOME A “FAN OF GLOW” ON FACEBOOK AND GET THE BEST DISCOUNTS TO ALL GLOW AND 4PLAY EVENTS!!!