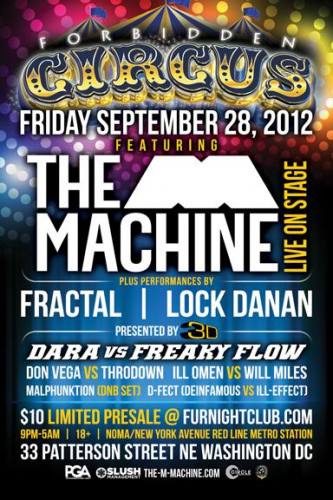 After months of silence, San Francisco's The M Machine have released the first half of their debut album, a six track release dubbed Metropolis Pt. I, on multiple Grammy Award winner Skrillex's label, OWSLA. Boldly bridging genres, The M Machine's latest release offers an original sound that justifies the increasing buzz surrounding the band since their inception and stakes a claim on the map of electronic music that is all their own.

With this release, The M Machine looks to perfect the artistic union between man and machine, combining immaculate and powerful electronic production with emotional and infectious songwriting. A concept album of sorts, each song is a chapter in the story of the dystopian city of Metropolis. Sonically, the driving bass of "Immigrants" and dubstep dancefloor killer "Shadow In The Rose Garden" aggressively assert the raw power of electronic music, while "A King Alone" and "Faces" showcase the band's human touch: vocal-driven synth-pop at its finest. Replete with massive string arrangements, "Deep Search" and "Black" further demonstrate the trio's production prowess, yet reveal a refreshing emphasis on musicality, further highlighting the cinematic feeling that has become one of the band's trademarks.

In The Mafia Room Presented by 3D PRODUCTIONS

DJ Dara is an Irish drum and bass DJ operating mainly in North America. He is a member in the D'n'B group known as the Planet of the Drums. This group consists of Dieselboy, DJ Dara, and AK1200. Dara is also cofounder and owner of Breakbeat Science with a record shop based out of New York City specializing in drum and bass vinyl.

Freak Flow has always been captured by Jungle, drumandbass, and the underground music culture . He found that scratching and cutting had unique properties in accompaniment with jungle. Party-going patrons worldwide quickly caught on to this sound. Notably, for years, all of Flow’s sets featured lyrical-mastermind, MC Flipside, on the microphone, but with Flipside’s mid-2004 decision to quit touring with Flow and focus on his own stage show and studio work, Flow now finds himself rocking crowds again all on his own, just like back in the day.

Flow has not lost sight of why he began to DJ in the first place. He simply possesses new tools to bring his art to more people. Indeed, the music is still his top priority. For Freaky Flow is still known as one of the most versatile and technically skilled producer/DJ's in North America, and still labeled ‘Toronto's Jungle Scratchmaster’ by promoters, producers, and partygoers alike. Swarms of partiers may consistently be found huddled around the DJ booth when Flow is on the decks, watching his every move.

ILL OMEN VS WILL MILES