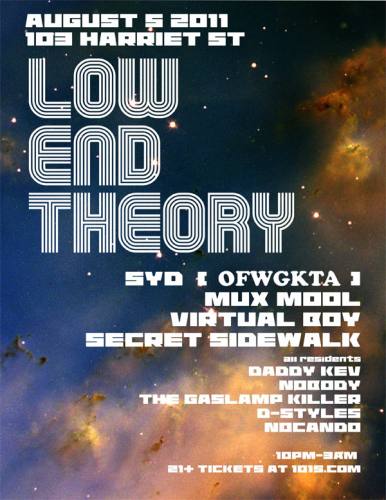 Low End Theory returns to the Bay Area on August 5 with a solid show of eclectic talent including Odd Future’s mysterious beat master Syd and all five of the club night’s residents.

Leading the lineup is Syd of OFWGKTA/Odd Future, the DJ and sonic engineer behind the hottest hip-hop act of 2011 and the controversial group’s only female member. With a minimal production aesthetic, Syd’s dense and disorienting beats give OFWGKTA a signature sound that stands up next to the rest of their antics.

Joining the lineup from Brooklyn is Mux Mool, who brings out the organic side of instrumental hip hop and flows smoothly between styles to create a live electronic hybrid. Virtual Boy stops by on the way from Los Angeles to the far reaches of outer space to drop vivid sonic cinematics, and the Bay Area’s own Secret Sidewalk (Mike Boo, Puzzle and Asonic Garcia) presents a new live show of wide sounds and true musicianship.

ALL Low End Theory residents will be on hand August 5 to wreak havoc with the freshest beats and fattest bass known to humankind: Daddy Kev, DJ Nobody, D-Styles, MC Nocando and The Gaslamp Killer.

Low End Theory San Francisco takes place the first Friday of every month at 103 Harriet Street and is 21+. Advance tickets are available now on the 1015 website.