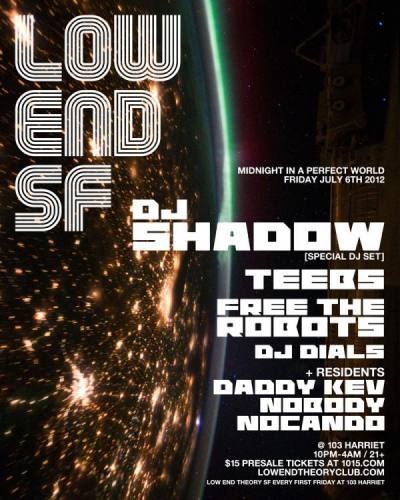 
DJ Shadow (born Josh Davis) is widely credited as a key figure in developing the experimental instrumental hip-hop style associated with the London-based Mo' Wax label. Inspired by hip-hop's early years, he then grew to absorb the heyday of crews like Eric B. & Rakim, Ultramagnetic MCs, and Public Enemy; groups which prominently featured DJs in their ranks.


Josh "Shadow" Davis had already been fiddling around with making beats and breaks on a four-track recorder while he was in high school in the NorCal cow-town of Davis, but it was during college that he co-founded his own Solesides label as an outlet for his original tracks. Hooking up with Davis' few b-boys (including eventual Solesides artists Blackalicious and Lyrics Born) through the college radio station, Shadow began releasing the Hip-Hop Reconstruction mix tapes in 1991 and pressed his 17-minute beat-head symphony "Entropy" in 1993. His tracks spread widely through the DJ-strong hip-hop underground, eventually catching the attention of Mo' Wax.


Shadow's website relaunched in August 2009, enabling him to sell digital downloads direct to his fans through his own autonomous storefront. 2009 also saw the announcement of Shadow's involvement with DJ Hero, an Activision video game which features Shadow as a playable character within the game. Shadow also contributed several mixes to the game.


While Shadow's profile has never been higher, he has increasingly shied away from music press and traditional forms of social networking. 2012 promises to be a busy year for DJ Shadow, with new music and a worldwide tour.


Teebs (aka Mtendere Mandowa) has been in the right place at the right time. The avid skater met esteemed workaholic producers Flying Lotus and Samiyam at a 2007 Red Bull Music Academy function in Orange County and later became immersed in Los Angeles’s weekly future-bass hot spot the Low End Theory, witnessing the Gaslamp Killer, Daedelus, Kutmah, and others tear it up on the regular. An Achilles-tendon injury forced Teebs to take a year off from skating, which allowed him to focus on his music. He eventually ended up rooming with FlyLo and Samiyam, absorbing the rampaging, wonkily funky sounds he heard in his living space and then peace-ing them out into more blissful configurations.


Chris Alfaro is Free the Robots. The genre-defying artist pulls together heavy doses of traditional jazz, psych, electronic and hip-hop, with progressive melodies and devastating drums into a rich pot of sound. His techniques create harmony between genres with the blending of obscure samples with analog and digital compositions.


Based out of Santa Ana, CA, Free The Robots started as a side project by Alfaro in 2003 while also playing with different bands, producing MCs and DJing. Having worked with so many different styles of music, Free the Robots brought everything together under one roof, allowing further exploration. With the use of samples, Controllers, and other live instruments, Alfaro creates a balance between the sounds of the past, present and future.


Free the Robots has reached a worldwide audience since its humble beginnings and found its place among the top artists in this genre. With the constant development of Alfaro's sound and live show, Free the Robots Has shared the stage with the likes of Prefuse 73, Flying Lotus, the Glitch Mob, Afrika Bambaataa and more.


In a musical world where anything that has a guitar can be called “rock,” it’s difficult to find music that is really creative. It’s even harder to find a band that is willing to take risks, and expand their art. But those things can be found in Free the Robots.”