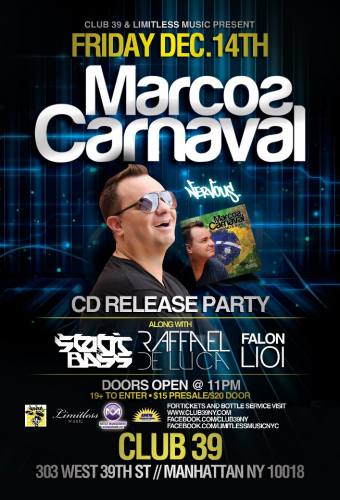 He has won multiple awards including DJ Sound Magazine’s best Brazilian DJ/Producer in 2000/2001 and was nominated to the DJ Sound Magazine 2010 & 2011 “Best Music Producer Award”. In addition, Marcos’ songs are featured on over 30 (thirty) CD compilations, a movie soundtrack, and 6 solo albums.

Graduating from Harvard University in 2008 Raffael De Luca could have taken the conventional path in life and took a job in finance and banking. But this young inspired DJ and Producer had other plans, as he knew House Music was his life-plan. Circulating the NYC music scene in 2009 Raffael De Luca quickly made a name for himself in the city as an electric new House DJ that mastered the art of c

RDL's sets could go anywhere from deep and sexy to big room progressive, depending on the party. In 2011, Raffael De Luca teamed up with fellow DJ/Producers Joel Jungell from Sweden and Octavian from Romania and formed Incalzando Records. The trio created a unique sound combining the driving melodies of progressive house with the seductive percussions of tech house and tribal.

Dj Falon Lioi attributes her love for house music from a Crobar party that she accidentally went to and has been inspired by the different genres of electronic music ever since. "I never heard it before, but I instantly became addicted." She decided to invest in equipment and began going to every local party she could find. She has worked with David Martinez, Dave "Vibes" Tobon, Arana, Bacteria Records, Auricula, Maria Dark, Juan Cordovi, Dimitri, Technolasko & Rissa Garcia for venues in NYC and NJ. International gigs include the Majestic Elegance Resort Punta Cana, Dominican Republic.

"I play based on what I feel coming from around me so you don't know what sound I'll give you--and this allows me the privilege to work with many amazing djs."

Nothing more than twenty years of combined experience within the realms of DJing and production, Static and Bass have now begun to come into their own after roughly two years of dedicated partnership. Since combining their talents in 2012, the New York-based collective has awarded some of New York City’s premier venues, such as Pacha and Webster Hall, with their unmistakable electronic flair. With a new EP "Sequoia" released earlier this year on California-based Acropolis RPM Records, the duo aims at continually pushing the envelope and furthermore solidifying their trademark sound. In addition to a number of high-energy and creative mashups, bootlegs and edits, all with their signature sound that blends electro, house and trance. Their recent gigs include opening and closing premier venues such as Pacha and Distirct 36 for top talent like Filo & Peri, Starkillers, DJ Shogun, Tom Fall, and George Acosta.