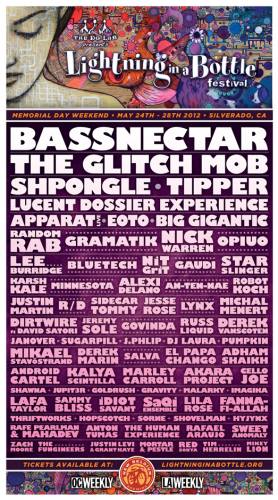 The Do LaB presents the music lineup for the 7th annual Lightning in a Bottle International Music and Arts Festival, featuring headliners and electronic music artists Bassnectar and The Glitch Mob. In addition, it will feature a number of returning friends of the festival, including Apparat, Bluetech, Tipper, and performance troupe Lucent Dossier Experience, along with first-timers like international "psybient" sensation Shpongle and sampling mastermind Gramatik from the rising Pretty Lights Music record label.


Bassnectar and The Glitch Mob's relationship with Lightning in a Bottle dates back to 2007 when they first appeared on the lineup and both artists and the festival were beginning to find their voice and audience. Over the past five years, all three have emerged from the California underground community to become national players in the emerging world of heart-pounding electronic music.


“We’re proud to bring this community of musicians and friends back together again for its biggest, most realized vision of music, consciousness, and sustainability efforts in the hills of Southern California,” said Jesse Flemming, co-founder, The Do LaB.