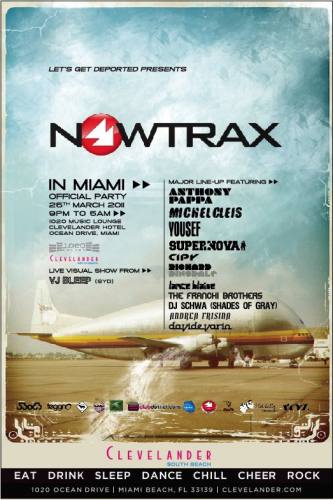 What: Lets Get Deported presents: Nowtrax in Miami Official Party

It all started with a house party in Sydney put on by one of its most notorious partiers and promoters, let’s call him Maurizio, and his pack of ever-up-for-it party animals. The ultimate after-after party, following a huge Saturday night and ‘recovery’ at Sydney’s notorious Sunday morning kick-on at King Cross’ legendary dark Techno-hole: The Bunker (sadly missed since the roof, literally, caved-in). The looming threat of Maurizio’s deportation set the scene for a no-holds-barred, living-in-the-moment vibe and drew friends and acquaintances from every corner of Sydney, be they clubbers or the DJs that wanted to take the chance to show their support for the guy who always got their party started. For evidence, check: http://goo.gl/pole8.

The grey cloud of continuing immigration policy battles which saw Maurizio leave and return Australian shores periodically had silver lining: an opportunity for more all-out “Let’s Get Deported” parties, celebrating all that was good about the Sydney scene he’d likely be departing (again). These parties prompted DJs such as Emerson Todd, Dopamine, Schwa, The Franchi Brothers and many stalwarts of the Australian underground to turn-up for their chance to rock the House.

Now resident in the US, Maurizio’s determined to bring the Let’s Get Deported celebratory, all-out atmosphere to Miami keeping true to the spirit of the original parties by keeping it in the family. Nowtrax is presenting some of those DJs who freely gave of their time making the Sydney house parties so legendary and a selection of those whose music featured prominently at them.

To establish this heady atmosphere Nowtrax features the “DJ’s DJ” ANTHONY PAPPA, originally from Australia and acquainted with the Let’s Get Deported crew bringing his unique smooth blend; son of an artist, sculptor and musician in a crazy and joyful band in New Orleans, MICHEL CLEIS, with his “clever, clean sound, mixing tribal and minimalist rhythms”; YOUSEF’s “pulsating tech” and “cross-genre grooves”.

All this underscores Nowtrax’s dedication to bring the noise, quality noise, regardless of genre classification. This theme continues with SUPERNOVA whose “sets create an explosive mix of soul, funk and acid house”; the “deep soulful house to techno and everything in between” that CIPY’s known for; and the “clattering percussion, spiked hooks, unpredictable instrumental flares and insatiable hip-swinging grooves” that only RICHARD DINSDALE brings.

Further, this is complemented by the “twisted minimal sound” of LANCE BLAISE, the “tech-house deep rolling fiesta affair” of THE FRANCHI BROTHERS, SCHWA's progressive House and Techno blend and the engaging grooves of ANDREA FRISINA and DAVIDE VARIO from Flat Belly Recordings.

All this presented in a setting with a dance floor overlooking the pool and a state-of-the-art tri-amplified sound system at 1020 at THE CLEVE, complimented by the visual stylings of Sydney’s very own VJ BLEEP.
About | Advertise | Contact | FAQs | Terms of Use | Privacy Policy | Accessibility Policy © 2022 - TheUntz.com. All rights reserved.