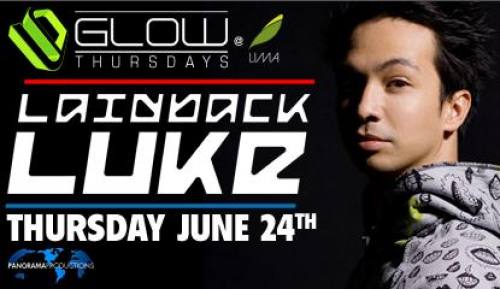 Thursday June 24th 2010
LAIDBACK LUKE
(laidbackluke.com, myspace.com/laidbackluke, Mixmash-Holland)
Opening set by
RICH WEBB
(GLOW-DC)
Luke is laid back about everything except music. Since landing a new entry – 46 – in DJ magazine's Top 100 DJs Poll of 2008, it's clear that Holland's homeboy is on fire like never before. It's why he was selected to ignite the Stealth Live! CD series with a near perfect club mix. Why he was snapped up for a weekly Friday show by French station Radio FG. Why his own party, Super You&Me, is such a winner. Why he is bustin' up bassbins from Australia to the Americas – and ripping up a storm working with everyone from Diplo to Tiësto. Yes, Luke's stratospheric success befits his world-beating talents and is reaching new levels of hotness in 2009! 2009 is Luke's craziest year yet. His collaboration with the Swedish House Mafia, 'Leave The World Behind', was an Essential New Tune on Pete Tong's Miami show – and, as of July 2009, is Beatport's best-selling track of the year. His Super You&Me party at club Louis during WMC was also an incredible success, starring some sick tag-team antics from Diplo & A-Trak before Luke closed the show. Plus, Luke & Diplo have produced a dancefloor slayer called 'Hey' on Southern Fried. This is supported by DJs like Kissy Sell Out, on his Radio 1 show, where Luke's track with Lee Mortimer, 'Blau', received airplay. Naturally, Luke's remix talents are equally in demand – just see Martin Solveig's 'Boys & Girls' and MSTRKRFT featuring John Legend's 'Heartbreaker'. To top it off, he has remixed David Guetta and traded remixes with Tiësto. Meanwhile, Luke's own killer track 'My G*O*D* (My Guns On Demo)' is scorching floors, and he's always testing new artillery on his travels. Touring in 2009 has seen Luke continue to blaze a trail from Australia to Ibiza, where he played for David Guetta's Fuck Me I'm Famous party at Pacha, and with Roger Sanchez for Release Yourself at Amnesia. Further marking his transition to major league status, this year has also seen him nominated for best House DJ in Ibiza's DJ Awards. Luke (Luke van Scheppingen) was born in Manila, Philippines, but grew up in the Netherlands. He loved guitars, graffiti, hip-hop and house, and found a mentor in Dobre (Chocolate Puma). He was just a teenager when he began producing, taking the 'laid back' tag from Snoop Dogg's 'Gin & Juice'. Yet by 1995 he was putting out tracks and from 96 was remixing for established artists, in addition to DJing professionally. Once beating a Dutch DMC champ in battle, Luke showed the world how he rolls: skilfully fusing an array of flavours, edits, bootlegs and a cappellas into a slick signature style. He even released an album, Psyched U, in 1999. But it wasn't until Virgin signed 'Rocking With The Best' and released his 2002 album, Electronic Satisfaction, that his profile soared. Luke's Dance Valley anthem, 'We Can Not Get Enough', then blew up. He also mixed his first compilation, Windmill Skill. His discography was therefore already looking prolific as he remixed Daft Punk (who were a huge early influence), Murk, Oliver Lieb and Tom Stephan. And to up the output in 2004, he introduced his own label, Mixmash. Luke's alliance with the Swedish House Mafia first came to fruition when he remixed 'Sexy F**k' for Steve Angello's Size in 2006, and with Angello produced 'Otherwize Then'. These marked the start of an annual tradition of making music with the Swedes. Thus in 2007 Luke joined forces with the guys for 'Get Dumb', while his other tracks exploded on Size and Stealth. He then revitalised Mixmash via 'Rocking With The Best 2007', before showcasing a deeper sound on his Afterdark Vol. 3 mix for Stealth alongside Roger Sanchez. Around this time, his new residency at Amsterdam club Paradiso – Super You&Me – also started poppin'. In 2008 Luke released 5 tracks, 18 remixes and played almost 200 DJ sets – including his first Radio 1 Essential Mix. Another Mixmash smash, and one more Essential Tune, came from his working with Kanye West's tour DJ A-Trak for 'Shake It Down'. Others making the Essential grade included his remixes of Underworld and Chromeo. It was a year that also saw him make an enormous impact on Ibiza. After playing at Amnesia, Pacha and Eden, he produced/remixed every track on his Ibiza Closing Party mix for Mixmag. And he ended the year with 'Show Me Love', by Luke & Steve Angello featuring Robin S, which entered both the Buzz and Cool Cuts Charts, and even reached 11 in the UK's official singles chart. DJing and producing relentlessly, and innovating musically like nobody else, more chart-busting, club-shaking times lie ahead for Luke. At this point, scrolling through his achievements may be exhausting enough, but imagine living that diary, my G*O*D*. His secret? Well, a clue is in the pure energy that he transmits and the martial arts that he practises. Yes, Luke has good 'kung fu', always keeping an ear to the ground while his music rockets skyward!
Featuring
-State of the art sound, lighting and visuals
-Outdoor Patio (smoking allowed)
Glow Thursdays at Lima – Ages 21+
1401 K St. NW Washington D.C.
Tickets & Info: www.clubglow.com Direct: 202.271.1171 Tables: 202.789.2800
Facebook: Glow Fan Page & “I Love Glow” Group // Myspace.com/clubglowdc
Twitter – ClubGlow // Blog: www.dcclubbing/blog
BECOME A “FAN OF GLOW” ON FACEBOOK AND GET THE BEST DISCOUNTS TO ALL GLOW EVENTS!!!