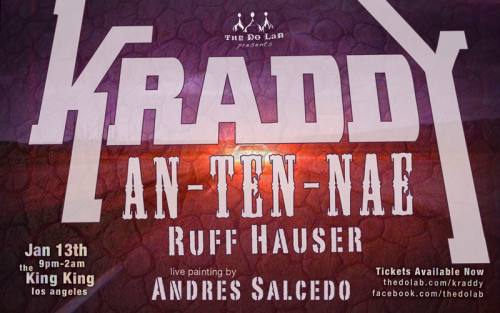 Minimum Age for event: 21 and over

KRADDY will be performing music off his banging new album and we can expect An-ten-nae to share his famous acid-crunk jams with us! Ruff Hauser will be rounding out the night of music! Andres Salcedo will be painting live as our featured Lightning in a Paintcan artist!

Hear the music and get Presale tickets now at:

The Los Angeles-based electronic-music Don known as Kraddy has always brought the undiluted sound of the underground to new audiences. From his work as a founding member of the infamous Glitch Mob to his groundbreaking solo work, Kraddy has always been known for shattering genre conventions while moving crowds around the country!

An-ten-nae is one of San Francisco's most sough after DJ's and live performers. After years of production ranging from electronica to breaks to dubstep, he has developed his signature "Acid Crunk"sound, currently dominating the west coast.

Ruff Hauser has definitely lived up to his name with his rough and rugged production. He has developed a style of his own by fusing elements of Dubstep, Glitch, 2 step, and minimal techno into one beautifully orchestrated arsenal of dance floor bangers. His production finds that sweet spot between heavy bass and melody!

Featured Lightning in a Paintcan Artist:

(entrance is in the back)

See you all on the dancefloor!