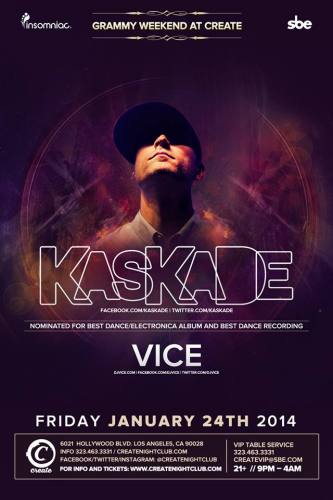 What: Kaskade & Vice at Create Nightclub

The New York Times may have called him the “new face of electronic dance music” in a recent profile, but Ryan Raddon, known as Kaskade, has been in the trenches of the EDM scene as an original recording artist and in-demand DJ for more than a decade. He has released seven studio albums, including his latest, Fire & Ice, scored nine Top 10 hits on Billboard’s Hot Dance Airplay Chart, created chart-topping remixes for everyone from Lady Gaga to Beyoncé, appeared at all the major summer festivals, and has performed between 150 and 200 headlining shows a year for the last 10 years, building a name for himself as an innovator of the EDM scene as we know it today, which has opened doors for the likes of Deadmau5, Tiesto, Skrillex and more. In doing so, he has helped to lay the groundwork for a titanic musical and cultural shift: a post-rock EDM revolution that has captured the imagination of a new generation of music lovers across North America
About | Advertise | Contact | FAQs | Terms of Use | Privacy Policy | Accessibility Policy © 2021 - TheUntz.com. All rights reserved.