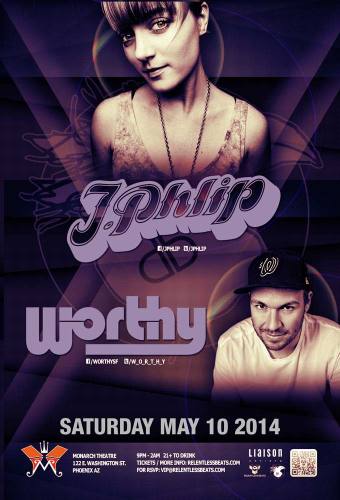 Relentless Beats presents J.Phlip and Worthy at Monarch Theatre in Downtown Phoenix on Saturday, May 10 2014.

J. Phlip (pronounced J Flip) known to some as Jessica Phillippe discovered house music in her hometown of Champaign, Illinois, just 2 hours south of Chicago. Sometime around her 19th birthday she got her first DJ rig - two belt drive turntables and a mixer lacking EQ knobs for $100 bucks! From then on, her poor roomates were forced to listen to a constant dance party in-between her Systems Engineering studies. There aren't a lot of 4.0 braniac engineering majors who decide to become DJs instead of cashing in on their degrees but Jessica truly loves the music and has dedicated her life to it.

When it comes down to all the press and hype, his name says it all. He is Worthy. With an in-depth knowledge of production, mixing, and performance, Worthy has the insight to play for his audience, cultivating intense positive energy on the dance floor that can only be portrayed as superhuman. His sound can be described as organic breakbeats with a mix of future house, 80s, booty bass, and techno. As Carl Cox said, "The Worthy sound has always been powerful, rocking, funky, bass-driven music at its best, and for me this is the new wave in house music." Worthy has received the recognition of major producers who have played his tracks including Sven Vath, Diplo, and Richie Hawtin, among many.