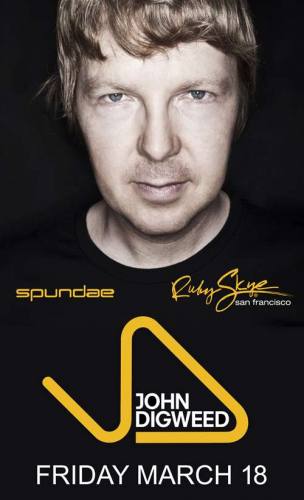 If you’re not an avid follower of dance music but are tuned into popular culture at all you’ve likely experienced music touched by the hands of John Digweed. Originally hailing from England but having clearly arrived on the global scene well over a decade ago John has long since cemented his name in the pages of dance music history. His list of achievements is groundbreaking to say the least. Highlights of which would be the first proper dj mix compilation (“The Mix Collection”, done with Sasha), being the first British dj to hold a residency at what was then the world’s most well known club in NYC (Twilo, also with Sasha) as well as having remixed music by William Orbit, Underworld, Quincy Jones, Mr Fogg and New Order.

John Digweed is a DJ’s DJ. The beauty of what he does lies in just how different he really is from his contemporaries. From his early beginnings in Hastings, England at the age of 15 in the blossoming scene of acid house to the apex of the international dj’ing world he has created and maintained a level of integrity that is the benchmark for both dj’s and producers globally. In fact, he has reached the very top of his profession, being voted #1 in a voter’s poll. John Digweed has become the people’s choice while maintaining his longstanding presence in underground dance culture. His popularity as both a dj and a person seems to have no limits, but his efforts transcend dj’ing alone, he is as much a producer and promoter. His moniker “Bedrock” is actually three things: a record label, a promotions company and a studio production partnership with Nick Muir.

His management and creative direction for the Bedrock record label spans over 12 years with the vision and creative insight to seek out mixes and remixes from the worlds best producers . To have a record released on Bedrock serves as the global stamp of production quality, ingenuity and integrity for underground producers worldwide. In fact, the name John Digweed is synonymous with those very qualities. From the nights he has either created or been a part of (Bedrock, Northern Exposure) to his world renowned mix cd’s (Renaissance, GU, Northern Exposure, Transitions and Bedrock compilation album`s 10 ,11 12 and Structures) he has consistently produced characteristic products that stay in demand, himself included.

As one half of Bedrock the production duo he has landed two tracks in the top 40 (“Heaven Scent” and “For What You Dream Of”) the latter of which made it into the hit movie “Trainspotting”. He has even tried a bit of acting himself (“Groove”). He and Nick Muir as Bedrock the production team also scored a Hollywood film (“Stark Raving Mad”) as well as the animated release of “Spider-Man” for Sony / MTV. He’s toured every corner of the planet including bus tours in the USA (Delta Heavy and Area 2 (with David Bowie and Moby) , The legendary Big Beach Boutique in Brighton with Fatboy slim had him gladly performing to 250,000 and most recently selling out the O2 Brixton Academy for Bedrock`s 12th Anniversary.

His Transitions Radio show is now it`s 10th year and is still one of the most successful dance music shows, being broadcast to over 30 countries across the world to a weekly audience of over 12 million.