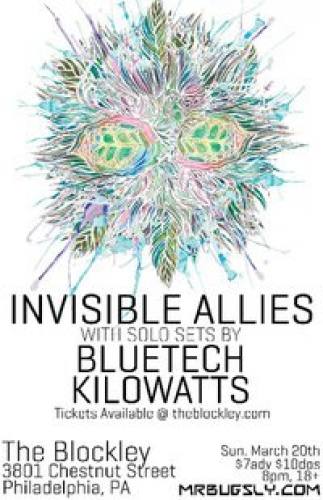 Mr Bugsly and Autonomous Music are teaming up to bring you another heater event! This time, of the minimal genre! Come out early on March 20th, and get down to the organic sounds of....

For information on how to earn free tickets contact-

For all other inquires

There will be 1 set perform by each act, totaling for 3 sets of blissful tunes!

Invisible Allies is a collaboration between well known West Coast downtempo aficionado Bluetech and Philadelphia electronic mastermind KiloWatts. Both established with numerous releases and projects spanning various genres, the Invisible Allies collaboration is a meeting between two distinct and imaginative minds, each with acute musical sensibilities and signature aesthetics.

A classically trained pianist and master of the art of software production. Bluetech's love of the melodic and exquisite sense of sound design makes him one of the most ingenius producers today.

Bluetech's sound emerges from his custom-built Reaktor instruments and software based synthesisers as a primordial electro-dub alchemy. While encompassing musical touches from different parts of the globe, he presents a total blend, crossing genres and borders.

Jamie Watts is the mind behind KiloWatts and his many different projects and styles. His work embraces the bulk of electronic genres, including breaks, IDM, techno, and downtempo. His fluency in piano is evident throughout his work, as is his penchant for jazzy riffs, intelligent structure, wistful melodies, and an often cheeky take on the current state and history of electronic music as a whole. His album “Ground State” is out on Native State Records, home to fellow pioneers Bluetech and Shen. It’s a collection of sweaty psychedelic downtempo grooves, churning molasses-thick basslines, and undulating synthetic sonorous mandalas. KiloWatts has albums on Artificial Music Machine that are full of visionary dimensions, fusing together a dexterous knowledge of sound synthesis, deep emotional articulation, and solid melodic intuition. Peppered throughout these monumental statements are releases with class labels such as Harmonious Discord, Thoughtless Music, and his own outlet, KiloWatts Music, that celebrate his adept technical expertise, often bringing a whirlwind of mindblowing digital wizardry in the form of glitches and edits.