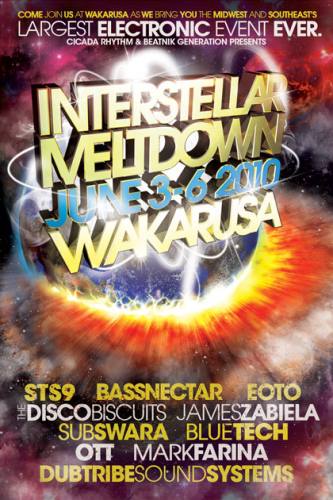 The Wakarusa Music and Camping Festival is a 4-day foot-stomping party in the heart of the Midwest. Born in 2004, Wakarusa burst onto the scene with a diverse and eclectic lineup featuring over 70 artists. The 2004 and 2005 bills perked the interest of both devout and casual music fans alike. Fans that made the trip to Wakarusa left with unforgettable stories of the music and the beautiful surroundings. In 2006, Wakarusa returned and quickly established itself as a premiere, grassroots event in the nationwide outdoor music scene. Attracting folks from all 50 U.S. States and 5 countries, the 2006 event featured over 100 artists, 7 stages and over 4 days of non-stop music and entertainment. The 2007 and 2008 events again featured over 100s of artists and drew attendees from all 50 U.S. States and several countries. 2009 marked the event's first year at Mulberry Mountain in Ozark, Arkansas. In 2010, Wakarusa is back again at Mulberry Mountain, and will once again provide a diverse musical lineup.
The initial artist announcement included the following DJ's and Live Electronic acts: Bassnectar, STS9, Boombox, Big Gigantic, The Disco Biscuits, EOTO, Lotus, Bluetech (Sunrise Set), and Sub Swara.