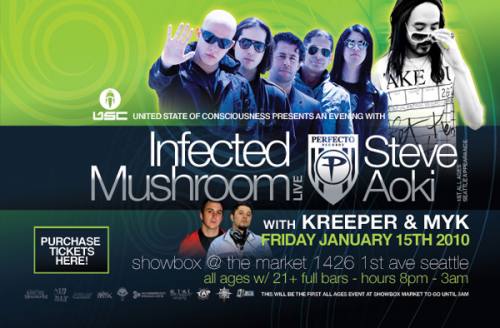 INFECTED MUSHROOM live
http://www.coastiicoastent.com/infected
STEVE AOKI
(1st All Ages Seattle Appearance)
https://deckstar.box.net/shared/s12inej7op
KREEPER
Digital Innovators, Housewreckin, Breakbeat Ninjas
MYK
Phase 3 Events, Smokeshack, H$M, Tap Tap
ALL AGES W/ 21+ FULL BARS
HOURS: 8PM-3AM
(THE FIRST ALL AGES EVENT AT SHOWBOX MARKET TO GO UNTIL 3AM)
ADDITIONAL INFORMATION:
www.uscevents.com / 888.221.7491 / www.showboxonline.com
More on Infected Mushroom:
"We're an electronic band," affirms Amit "Duvdev" Duvedevani, singer and co-founder of the Israel-bred, Los Angeles-based psy-trance duo Infected Mushroom, "but when we became a full live band onstage, the reaction was so powerful that we knew we were inventing something new."
The dynamic, shaven-headed Duvdev and his flowing-haired partner, Erez Eisen, have been playing to increasingly massive, frenzied crowds all over the globe, thanks to an explosive live show that is a far cry from the staid stereotype of dance acts hunched over their computers.
With Duvdev bouncing all over the stage and exhorting the crowd to belt out the lyrics, Erez virtually dancing with his keyboards, tour guitarist Tommy Cunningham (or, ..ed dates, Israeli axemaster Erez Netz) firing off metallic riffs and Brazilian drummer Rogerio Jardim boosting the Mushroom's programmed beats with propulsive polyrhythms, the band has whipped audiences worldwide to a fine froth.
Infect Mushroom developed a particularly rabid following in Latin America, where fans who'd discovered their MP3s sparked a viral phenomenon. "Around 2000 we were invited to play in Mexico, and we'd sold about 15 CDs there," Duvdev recalls. "But this promoter invites us to play a party for 4,000 people. We thought he was crazy, that nobody there had heard of us â but they'd all found our music on Napster."
The band has, in fact, rocked more than a million people around the globe, headlining such festivals as OMIX in Mexico, Miami's Ultra Festival, California's Coachella Valley Music and Arts Festival, San Diego Street Scene, L.A.'s Monster Massive, The Virgin Festivals in Toronto and Baltimore, and Sao Paulo's Tribe â as well as packing venues from Haifa to Los Angeles.
Similar madness marked their 2007 Virgin Festival performance in Baltimore, during which rock-rap phenom Matisyahu jumped onstage and unleashed a freestyle vocal over a gale-force Mushroom groove. "The crowd was already mental when we hit the stage," Duvdev recalls. "Matisyahu came out of nowhere and said, âLet's jam.' Then the vibe went really crazy. People were throwing themselves around. It surprised us as much as anyone else." Clips of this ecstatic moment of international Jewish rock synergy soon popped up on YouTube, joining a growing library of video chronicling the band's ultra-intense live sets.
Their raucous, revelatory experiences on the road have also sparked a desire for further experimentation in the studio. "A lot of people say to us, 'I get this feeling at your shows that I can't always get from the CDs,'" Duvdev reveals. "So the next record is going to be all about capturing the energy of the full band. It's going to blow people away."