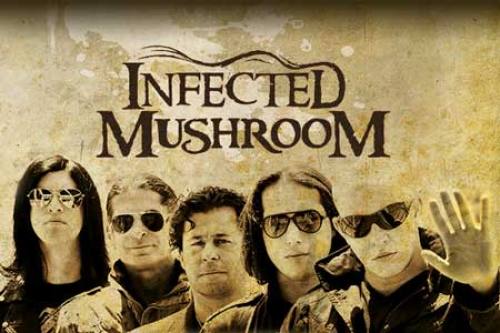 What: INFECTED MUSHROOM @ THE RAVE

Don't miss your chance to see Psy-Trance innovators Infected Mushroom,one of the biggest electronic bands on the planet live at The Rave Saturday March 20. Twice ranked among the world’s 10 best DJs by the bible of the scene, the U.K.’s DJ Magazine, the Israel-bred, L.A. based duo bring a frenetic rock energy to the form. Their explosive show, featuring guitars, live drums, intensely passionate vocals and an ambitious multimedia backdrop, ranks among the genre’s most unpredictably joyous events. And their recordings continually venture where other electronic acts fear to tread.
Amit “Duvdev” Duvedevani and Erez Eisen have been working for nearly two years on an aggressive new album – their first since 2007’s critically acclaimed Vicious Delicious – for dance-music visionary Paul Oakenfold’s Perfecto label. Duvdev describes the as-yet untitled record, recorded at Infected Mushroom Laboratory in L.A. and slated for a June 2009 release, as a return to the pair’s metal roots. Guests include singer Jonathan Davis of Korn, who lends his estimable pipes to the track “Smashing the Opponent.”
Oakenfold has worked closely with the band in an A&R capacity. “Paul’s known as a House DJ, so we weren’t sure how he’d feel about our heaviest material,” Duvdev reveals, “but he loved it. He’s really brought a lot of great energy and advice to the table.”
From the Ultra Fest in Miami to the Virgin Festival in Baltimore, from Mexico’s OMIX to Cali’s Coachella, from Brazil’s Ipanema Beach to Melbourne’s Metro Club, Infected Mushroom has averaged about 120 live performances per year. The band will honor that tradition in 2009, starting with a 17-date U.S. tour slated to kick off in Texas in March.