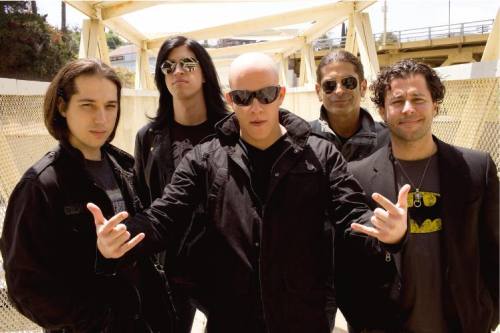 What: Infected Mushroom @ The Music Box

“It was originally going to be a concept album about food we are addicted to,” says Amit “Duvdev” Duvedevani of electronic-rock phenoms INFECTED MUSHROOM about the group’s latest album, Legend of the Black Shawarma. “We had a batch of songs celebrating our favorite places to eat around the world. Then we got into more intense subject matter, but as the title suggests, there’s still a lot of material about getting your grub on.”
For their ravenous international fan base, the latest offering--due out September 8 on Paul Oakenfold’s Perfecto label from Duvdev and his musical partner Erez Eisen--is some very potent Mushroom indeed and boasts some high-profile guests. The lead single “Smashing the Opponent” features a scorching vocal from Korn’s Jonathan Davis, while Jane’s Addiction/Porno for Pyros frontman and alternative-rock patron saint Perry Farrell lends his inimitable pipes to the follow-up single , “Killing Time.”
“Recording with Jonathan and Perry was a highlight, of course,” Duvdev notes. “They were both incredibly cool. The fact that they liked the tracks was awesome because we’re huge fans of what they do.”
Shawarma finds the Israeli-bred, L.A.-based electronic duo taking their Psy-Trance fusion of bruising, metallic rock and unstoppable dance-floor beats to a new level. “It’s a really diverse record,” Duvdev relates of the band’s follow-up to 2007’s Vicious Delicious, “it’s even more aggressive–both on the metal side and on the breakbeat side.”
Oakenfold worked closely with the band in an A&R/producer capacity. “Paul’s known as a house DJ, so we weren’t sure how he’d feel about our heaviest material,” Duvdev reveals, “but he loved it. He brought a lot of great energy and advice to the table.” Duvdev and Erez also road-tested several of the tracks in dance clubs, then adjusted them based on audience response.
The band took its time crafting the album , working on material whenever their frenetic, globe-trotting tour schedule permitted. During the process they constructed a new studio from scratch in the aptly named So Cal locale of Studio City. “We used to go into any room and make it a studio,” Duvdev recalls. “But the new Infected Mushroom Laboratory is as state-of-the-art as you can get for recording electronic music. We built a tracking room for live drums.”
Whether singing about “Smashing” and “Killing” or paying tribute to beloved eateries like “Poquito Mas,” “Frank’s” (“The best taco place in Mexico in our opinion”) or Israeli hummus factory “Sae’ed,” Infected Mushroom prove they’ve stayed hungry despite their massive international success. “That’s us,” Duvdev says with a laugh. “Kicking ass and then having a snack.”
What of the album’s mysterious, culinary title? “We were on tour in Australia two years ago,” he explains. “A friend came to me & said, ‘I have this dream to dive with sharks.’ They do that in Australia–you’re lowered into shark-infested waters in a cage.” At that point, Duvdev warned his burly friend that in a wetsuit he would resemble, to toothy denizens of the deep, a certain meat wrap of Middle Eastern origin. “I told him if he did this, there were five gigantic sharks waiting for a shawarma like him to come down in a cage and be devoured. We thought that was pretty funny and the Legend of the Black Shawarma was born.” As the title track’s cautionary lyrics have it: “Life’s been treating you nice/You better be wise/And enjoy your moment.”
Thanks to their boundary-pushing songs and incendiary performances, the adventurous duo has become one of the biggest electronic bands on the planet. Twice ranked among the world’s 10 best DJs by the bible of the scene, the U.K.’s DJ magazine, they routinely whip crowds of all cultures into the same whirling froth. Their explosive show, featuring guitars, live drums, Duvdev’s intensely passionate vocals, Erez’s nimble keyboards and an ambitious multimedia backdrop, ranks among the genre’s most unpredictably joyous events.
Their schedule has proved as relentless as their juggernaut jams. From the Ultra Music Festival in Miami (which drew over 100,000 attendees this past March), Cali’s Coachella, the Virgin Festival in Baltimore, Mexico’s OMIX, Brazil’s Ipanema Beach and Melbourne’s Metro Club, Infected Mushroom has averaged about 120 live performances per year.