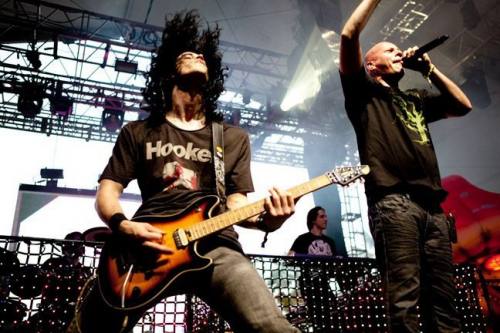 What: Infected Mushroom @ Radio Down

MADHATTER PROMOTIONS AND NEXT ERA ENTERTAINMENT PRESENT;
INFECTED MUSHROOM
Currently ranked #12 on the world famous DJ MAGAZINE TOP 100 DJ LIST, Psy-Trance innovators Infected Mushroom have become one of the biggest electronic bands on the planet. Twice ranked among the world’s 10 best DJs by the bible of the scene, the U.K.’s DJ Magazine, the Israel-bred, L.A. based duo bring a frenetic rock energy to the form. Their explosive show, featuring guitars, live drums, intensely passionate vocals and an ambitious multimedia backdrop, ranks among the genre’s most unpredictably joyous events. And their recordings continually venture where other electronic acts fear to tread.
Amit “Duvdev” Duvedevani and Erez Eisen have been working for nearly two years on an aggressive new album – their first since 2007’s critically acclaimed Vicious Delicious – for dance-music visionary Paul Oakenfold’s Perfecto label. Duvdev describes the as-yet untitled record, recorded at Infected Mushroom Laboratory in L.A. and slated for a June 2009 release, as a return to the pair’s metal roots. Guests include singer Jonathan Davis of Korn, who lends his estimable pipes to the track “Smashing the Opponent.”
Oakenfold has worked closely with the band in an A&R capacity. “Paul’s known as a House DJ, so we weren’t sure how he’d feel about our heaviest material,” Duvdev reveals, “but he loved it. He’s really brought a lot of great energy and advice to the table.”
From the Ultra Fest in Miami to the Virgin Festival in Baltimore, from Mexico’s OMIX to Cali’s Coachella, from Brazil’s Ipanema Beach to Melbourne’s Metro Club, Infected Mushroom has averaged about 120 live performances per year.
With support by;
TONY DESARO
Considered by many as Ohio's best house dj, Tony Desaro has been commanding dance floors for the past 17 years. Not many djs can claim that they have opened for Sasha and Digweed, Paul Van Dyk, BT, Deadmau5, Ferry Corsten, the Crystal Method, Dirty Vegas, Darude, Steve Porter, david guetta, and benni benassi. The list goes on and on. Tonys unique blend of tech house ranges full spectrum, from techno to funky. Full of amazing crescendos, his legendary sets have gained notoriety over the years.
ROYAL SOUNDSYSTEM
Ohio based veterans Kaiten & Elton Mack team up as the bass music outfit Royal Sound System, and have already left dancefloors destroyed in the wake of their massive four turntable sets. Kaiten is the founder of Royal Dubs, while Elton has long been an integral member of the Give Us A Break! crew, and both have gained widespread respect with precise mixing techniques and impeccable track selection. They have shared the stage with some of the biggest names in EDM over the last decade, and with a host of upcoming appearances they show no signs of slowing down.
For more information visit
http://cincyticket.com
http://madhatterclub.com
http://myspace.com/nexteraentmusic
LIMITED NUMBER OF TICKETS AVAILABLE GET THEM WHILE THEY LAST;
http://cincyticket.com
Brand new luxuary concert venue opening up May 15
700-1000 cap room
Radio Down
620 Scott Street
Covington KY 41011
(behind the Madhatter)
18+
Full Bar Available for 21+