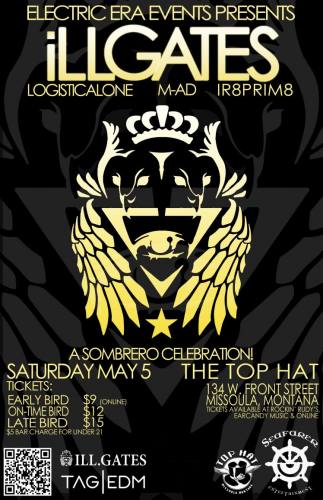 Join Electric Era and your friends for one last party night of the school year!

We are celebrating the top talent of ill.Gates as well as Cinco De Mayo!
DRESS CODE: SOMBRERO
18+

ill.Gates is a Toronto-based composer, performer and educator. Over the past 16 years, he has established a global fanbase and a reputation as one of the most dynamic electronic music artists around. He regularly tours across North America, Europe, Australia and Asia. Gates has headlined at such festivals as Burning Man, Shambala, the World Electronic Music Festival and the New Orleans Jazz Festival. His first full-length release, Autopirate (Muti Music, 2008) charted and continues to sell strongly. His upcoming triple album The ill.Methodology and accompanying online course are highly anticipated. Gates was recently selected as one of the Next 100 by URB Magazine.

Kicking it with his namesake, Bill Gates; while playing
a private party for Microsoft at the Sundance Film Festival (2010)
• A thriving creative partnership with San Francisco-based bass music icon Bassnectar, including a chart-topping remix of ‘Maximum’ by DJ Vadim that sold so fast the duo were accused of chart-hacking (2010)
• Recorded a free album live at Salon Leopold in Vienna.
• Developing Ableton Live production packs & tutorials for Eskamon, the new collaboration between Eskmo & Amon Tobin (2010)
• Headlined the world’s first concert for the deaf, using Emoti-Chairs developed by the Alternate Sensory Input Devices (ASID) Lab at Ryerson University (2009)
• Dance accompaniment by world-famous Chinese dancer Dino to his song ‘Eggplantation’ in front of a massive live audience in Singapore, which led to licensing of Autopirate in Korea (2009)
• Composed ‘Adagio for Disney Hall and Coffee Grinder’,
for an upcoming DVD by architect Frank Gehry which explores the relationship