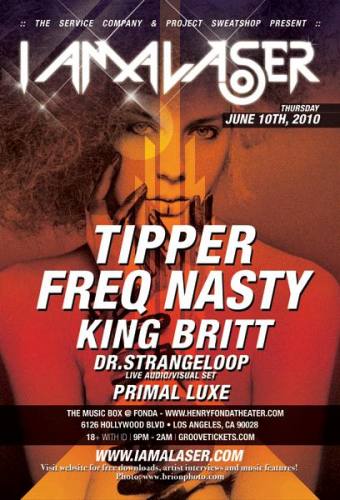 What: I AM A LASER w/TIPPER, FreQ Nasty, King Britt & Strangeloop

I AM A LASER, The Service Company and Project Sweatshop present a very special I AM A LASER event this June with a well-cultivated lineup of electronic music heavy hitters that will no doubt combine into an unforgettable night of spontaneous musical combustion, artistic creation and crowd reaction.
For five months I AM A LASER has presented forward-thinking LA music makers along with live art in a unique setting, drawing in a very diverse crowd of urban gypsies, beat freaks, city kids, soul seekers and people who just want to get down.
In June the party is ON, with a lineup that will perk up the ears of anyone whose heart pulses with the beat.
Headlining is glitch godfather Tipper, whose off-kilter jams and hopped up nu-electronica preceded the current river of midtempo mania. From trip hop to IDM to breaks and beyond, this UK producer is highly regarded for his manipulation of extreme bass frequencies and pioneering musical sensibility. Check out the album "Tip Hop" for a taste of his moving music.
FreQ Nasty brings his brand of futurestep to the table, a fusion of breakbeats, dub, glitch hop and other assorted stomp. Born in Fiji, raised in New Zealand, lived in London and now residing in Venice Beach, this producer's output is as eclectic as his story. Expect this rock star to read the crowd well and deliver the goods in waves of bass direct to your eardrums.
King Britt toured the world with Digable Planets as "Silkworm" and has produced many styles of music, however his latest endeavor is perhaps the most exciting yet. He will play I AM A LASER under the moniker Soul Litchfield, an experimental beat project out of Saturn Never Sleeps, where instrumental layers play with various textures of sound- and everybody wins.
Los Angeles' own Dr. Strangeloop (Brainfeeder) brings his live audio and visual set to the table; his creative expeditions into a more complete club experience will open your mind while dropping your jaw. Local funk master Primal Luxe opens the night, and once again I AM A LASER hosts live painting from Cannibal Flower, and photography from local lens wizard Curious Josh.
It all goes down Thursday, June 11 at The Music Box @ Fonda, an intimate and newly renovated venue located at 6126 Hollywood Blvd. The party is 18+ and goes from 9PM-2AM, presales are $20 and you can BUY TICKETS HERE:http://fla.vor.us/173000-TIpper-Freq-Nasty-King-Britt-tickets/TIpper-Freq-Nasty-King-Britt-Hollywood-The-Music-Box-June-10-2010.html?afflky=T58EJQ 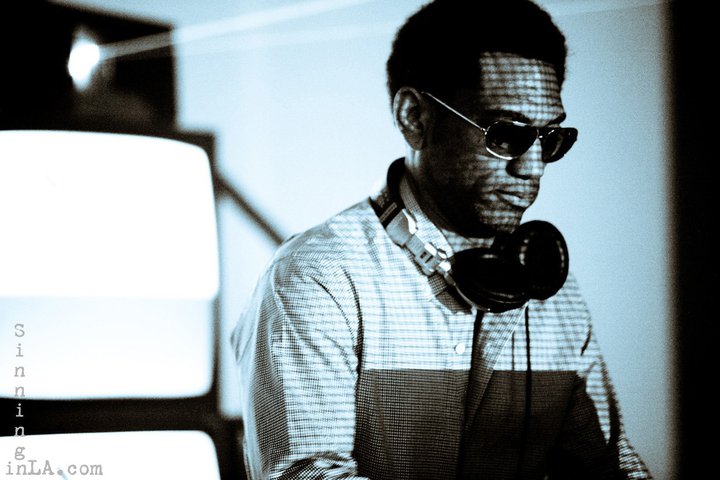