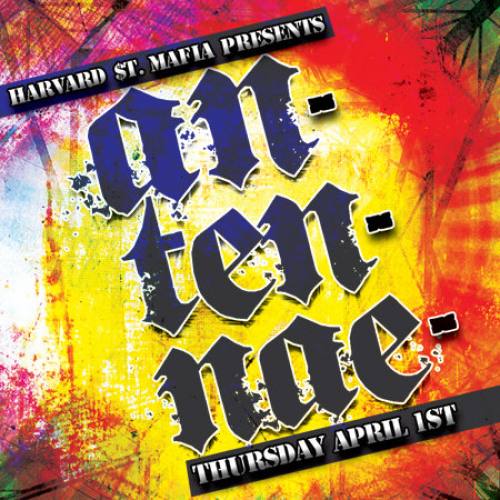 AN-TEN-NAE
SAN FRANCISCO, CA
ACID CRUNK || MUTI MUSIC
www.an-ten-nae.net
An*ten*nae is one of San Francisco’s most sought after DJs and live performers. After years of production ranging from electronica to breaks to dubstep, he has developed his signature “Acid Crunk” sound, currently dominating the west coast. An-ten-nae’s customized live sets push audiences and electronics to limits seldom seen.
His Mixtapes “Punk Rock Country Hop” and “Acid Crunk” were received with wide acclaim. The original blend of crunked out electro madness and pure dance-floor appeal has pushed the limits of genres and soundsystems worldwide, with Acid Crunk Vol. 2 breaking all sorts of records holding 3 number 1 positions simutaniously on Beatport, a feat never done before.
An*ten*nae / Adam Ohana has been DJ’ing and producing electronic music for over 15 years.He has toured Mexico, Australia, Africa, Japan, and extensively throughout Europe and North
America. On the west coast, he has been an integral part of the evolution of the underground music culture in SF and LA. His “An-ten-nae Presents” brand is responsible for some of the hottest concerts and parties the west coast has ever seen. These event continue to be a major influence on west coast culture. The original outlaw of bass, An-Ten-Nae continues to innovate and lead the wild west on its shotgun adventures into next level sound.
“An-ten-nae goes for the lowest, loudest bass on this reworking of the track "Hold the Line," which also features Santigold on vocals.” - XLR8R
“An-ten-nae pays tribute to his bass-loving comrades with this year's “Left Coast Stomp”, an anthem for like-minded souls along the Pacific.” -The Straight
“DJ An-ten-nae is a true San Francisco gem. With enough bass in his music to make your body thump and playing with names such as Diplo to The Glitch Mob, it’s no wonder his parties are met with so much success
and good times.” - SF Station
“He produces the kind of stinkin' Bass heavy beats that make you nod your head so hard it gives you a concussion. ” & “He's come up with probably our favourite name to describe the sound so far, infact from now on it is Acid Crunk.” - Chrome Kids
MICHAEL MANAHAN
STARBORNE PRODUCTIONS || ORACLE GATHERINGS || DECIBEL FESTIVAL
www.michaelmanahan.com
with special guest
Michael Manahan is an essential and vital element of the Left Coast electronic music community; he nourishes the underground not only with his deep and phat-funky tribal oriented tech house sets but also with his immense contributions to the exploration of consciousness and spiritual evolution through art and music. This DJ, performer, producer, and space cowboy is also the co-founder of the Oracle Gatherings, the co-producer of the Decibel Festival, as well as the co-producer of the electronic music stage at Hempfest, the world's largest reform protest. Also the owner of Starborne Productions, Manahan is an innovator and a leader of the Seattle dance community and tribal culture; a mainstay in the scene whose presence always ups the love whether he is spinning dubby house, hard techno, glitch-ridden breaks, spacey downtempo, or just hanging out being himself.
JUST ONE
HARVARD $T. MAFIA || SHIFT
www.harvardstmafia.com.com