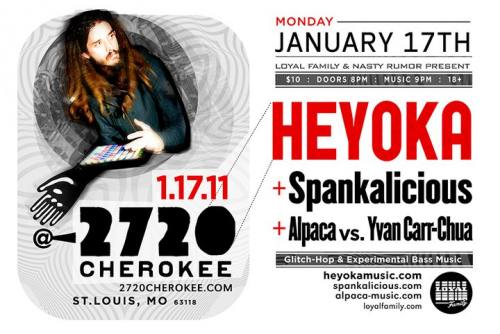 What: Heyoka + Spankalicious in St.Louis

Heyoka a.k.a. Andrei Olenev is another cosmic auditory scientist found in the Bay Area noosphere, who recently delighted us with his auditory manipulations. Muti Music first released Heyoka’s “Space Case EP” in 2008 and included him on their growing roster of talented artists.

Heyoka is fast bec...oming one of San Francisco’s hottest new producers on the scene and also one of the best performers. His early influences in Downtempo, Dub and IDM combined with more recent midtempo dancefloor genres from the likes of Bassnectar, Glitch Mob and An-ten-nae have helped create a very unique sound that combines relentless basslines, hip hop and dub rhythms with a lot of musicality and melody. Heyoka's earlier works were identifiable by their crushing basslines and ‘spacey’ blips and glitches, ‘Pineal Dub’ shows progression from Heyoka as a producer with greater use of negative space and ethereal melodies that can only be heard as melancholy or wickedly cheerful. The response to his emergence so far has been overwhelming with Heyoka opening nights for Tipper, Benga & Skream amongst others.

Spankalicious is bounce. Making his mark on the electronic music scene in the Midwest with the high energy that he brings to the stage, creating the vibe needed to get the rage started! Kevin Moore (aka: Spankalicious) is currently based out of St. Louis, Missouri. Coming from an extensive background in rudimental percussion/drumming have allowed Spank to read rhythms inside and out. Shown through scratching, drumming, as well as seamlessly blending and mixing. Spankalicious thrives on taking the crowd through a musical journey that always brings many flavors of emotion to the party. A hefty line of residencies, as well as extensive tour experience, have rounded Spank to be a self proven party rocker! In 2009 he co-billed with Ana Sia, Eoto, Vibesquad, Big Gigantic. Thus far in 2010 he has played alongside cutting edge headliners such as Pretty Lights, Bassnectar, CASPA, The Glitch Mob, Brother Ali, Boombox, Eskmo, Marty Party, Dubskin, Break Science, Kraddy, Mimosa, SAVOY, Two Fresh, Emancipator, Ott, Virtual Boy, and Elliot Lipp. He served as the host of the Wakarusa Dj Classic in Columbia and St. Louis, Mo. In June of this year he was voted "Best Dj in St. Louis" by the River Front Times annual readers poll/music showcase. Festival appearances include: Summer Camp Music Fest, Wakarusa's Interstellar Meltdown, Bassnectar's First Bass Center in Colorado, Underground Sound 6, Tall Tree Lake Fest, and Schwagstock 45 at Camp Zoe