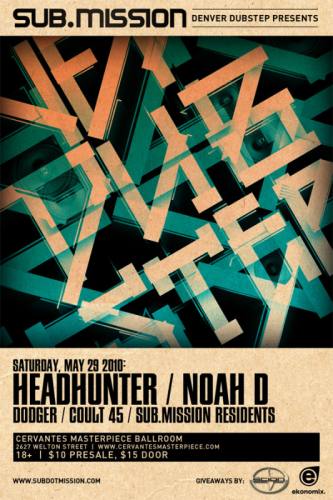 What: HEADHUNTER and NOAH D @ Cervantes

HEADHUNTER
http://www.myspace.com/dubstepheadhunter
Headhunter first made his mark in Dubstep by starting a label with Drum n Bass producer, Tech Itch in early 2006. Soon after 2 releases were in rotation, Tempa, the genre's pioneer label soon made the link to sign him exclusively.
Hailing from one of dubstep's landmark cities; Bristol, he's crafted a unique and distinctive style that reflects the soundsystem-inspired culture of his hometown and does justice to its rich musical history. With 2 Ep's released on Tempa and a string of remixes of producers such as Martin Buttrich, Brendon Moller, and Antix- the winter of '08 will see Headhunter focus on the anticipated release of his album on Tempa, as well as forthcoming collaborations and remixes with Kryptic Minds and Leon Switch
NOAH D
http://www.myspace.com/noahd
Noah D is without doubt one of the top Dubstep producers hailing from the USA. He has been building his reputation in both the Dubstep and Drum n Bass circles since 2003 and is highly regarded on both sides of the Atlantic for his musical output. His latest tune, "Seeeriousss" has been tearing up every dancefloor on every corner of the world and has become a full fledged Dubstep anthem for 2009. His music has received consistent radio play on many of the UK's biggest radio stations including RinseFM, Kiss and BBC's 1xtra and has been supported worldwide from DJ's such as Skream, Dieselboy, DJ Hype, N-Type, Plastician, Bassnectar, Glitch Mob and Benga just to name a few! Once behind the decks Noah D brings loads of energy and a diverse blend of beats mixed in a carefully crafted style that is guaranteed to create a memorable experience on the dance floor!
Local Support:
DODGER
COULT 45
Cervantes Masterpiece
$10/$15
8pm-2am
Sponsored by: Scion and Ekonomiks Clothing
About | Advertise | Contact | FAQs | Terms of Use | Privacy Policy | Accessibility Policy © 2022 - TheUntz.com. All rights reserved.