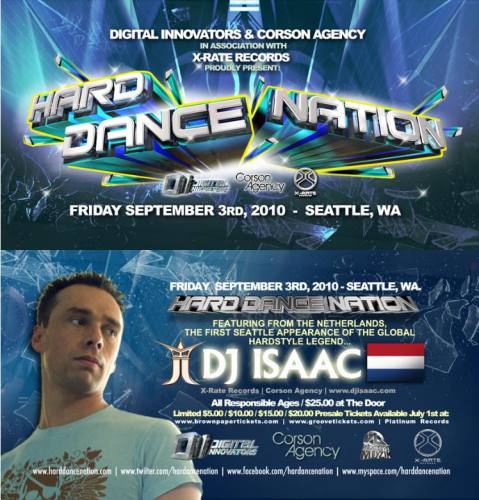 Artists:
DJ Isaac (X-Rate Records // The Netherlands)
JDX (Scantraxx Records // The Netherlands)
Used & Abused (Mental Madness Records // Los Angeles)
Wheelz (Smokeshack // Marble // Nu Breed)
Zack Attack (Digital Innovators // Pussycat Productions)
Beefer (Madcow // Pussycat Productions)
Tigon (Nu Breed)
Details:
On September 3rd...
Digital Innovators & Corson Agency in association with X-Rate Records Present:
HARD DANCE NATION
Featuring the Dutch Hardstyle legend:
DJ Isaac - The Netherlands *First Seattle Appearance*
X-Rate Records // Platinum Agency // Corson Agency
www.djisaac.com
DJ Isaac is at the forefront of harder dance music; a position he has held for over 14 years. Always sticking his head out for new revolutions in sound Roel Schutrups can be considered as one of the founders of hardstyle. His background and his continuing efforts in the studio make him a regular headliner at the world’s biggest dance festivals and events like Defqon, In Qontrol, and Decibel. He has created an international career which ultimately brought him everywhere in the world including Colombia, Australia, Japan, Russia, Canada, South Africa and the United States.
As a producer, DJ Isaac has been influenced by various styles of music; besides hard dance, he has been involved with successful trance projects such as; Alice Deejay. This particular project reached gold and platinum status all over the world, something he would later do again with hardstyle anthems ‘On The Edge’ and ‘Go Insane’. Because of this success, other renowned artists quickly found their way to his studio and Isaac soon remixed tracks for Brooklyn Bounce, Mauro Picotto, Safri Duo and Cosmic Gate.
Isaac hosted a resident radio show for over a year at the number one Dutch radio station 538. He is currently responsible for a weekly show on Q-dance radio, which is broadcasted worldwide and is considered one of the most influential radio channels in the harder styles. Furthermore, his label, X-Rate Records, has had many massive hits including ‘The Underground’ and ‘The Afterworld.’
Coming up this year is another Australian tour, co-productions with Wildstylez and D-Block & S- te-Fan for their debut studio album, new releases on X-rate Records and another solo release. DJ Isaac has a bright future for an artist who has created his own world.
JDX - The Netherlands *First Seattle Appearance*
Scantraxx Records // Corson Agency
www.j-d-x.com
Another top Scantraxx artist comes to Seattle for the FIRST Time Ever!!! He has produced massive anthems for Sensation Black, In Qontrol and worked on projects such a Thalamus. He has produced on such labels as Scantraxx, Q-Dance, ID&T, Thunderdome, Straight On, Rude Records and DJS records. He has produced tracks like “Kick It In Ur Face”, "Sensation Black Anthem 2005", “Qlimax Anthem 2006”, “In Qontrol Anthem 2006”, “Defqon1 Anthem 2007” and most recently, “Live The Moment”, which featured Sarah Maria. He has produced music with The Prophet, Brennan Heart, Alpha Twins and has been involved in many other behind-the-scenes productions so you better watch out for this mega producer!!!
Used & Abused - Los Angeles
Corson Agency // Mental Madness Records
www.used-abused.com
www.myspace.com/usedandabusedla
Being influenced by the likes of top European artists, Used & Abused has single- handedly kept the hard dance scene thriving in Los Angeles. He further pushes the envelope by being the only American producer on Mental Madness Records based out of Germany. Used & Abused has gained respect as a hard dance force to be reckoned with! With an in-your-face mix of clubby to down and dirty Techno, Hard House, Hardstyle, and Jumpstyle, this DJ will make you beg to be ‘Used & Abused’ on the dance floor!!!
With Local Support from:
Wheelz
Smokeshack, Marble, Nu Breed
www.myspace.com/djwheelz
Zack Attack
Digital Innovators II Pussycat Productions
www.myspace.com/zackattack206
Beefer
Madcow II Pussycat Productions
www.myspace.com/djbeefer
Tigon
Nu Breed
www.myspace.com/djtigon
About | Advertise | Contact | FAQs | Terms of Use | Privacy Policy | Accessibility Policy © 2022 - TheUntz.com. All rights reserved.