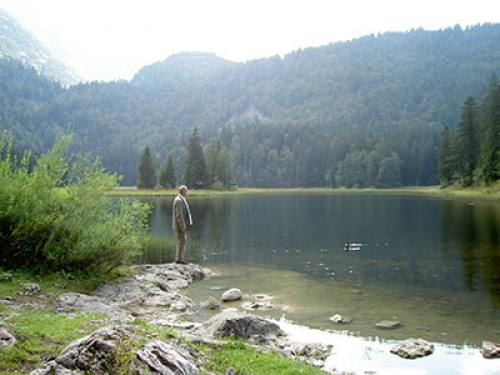 German electronic music legend Hans-Joachim Roedelius, with a discography of more than 80 releases, has been active in music for over thirty years. He is a pioneer in electronic music, not least for his collaborations with such prominent musicians / composers / producers as Peter Baumannn, Holger Czukay, Brian Eno, Dieter Moebius, Conny Plank and Michael Rother. Born 1934 in Berlin, Hans-Joachim has been a nurse, physiotherapist, masseur, escort of the dying, composer, writer, poet, foto-collage-artist, and producer. In his storied career he has been the founder/member of the artslab Zodiak in Berlin (1968) and many groups such as: per-sonare, Kluster, Cluster, Harmonia, Friendly Game, Aquarello and Tempus Transit.

Over his prolific career, Roedelius's musical output has covered a great deal of sonic territory and emotional range: from deeply introspective to rhythmically dancey, from experimental improvisations to heart felt vignettes, Roedelius is a musician of depth and breadth. His influence on the genre of electronic music will be felt for many years.
About | Advertise | Contact | FAQs | Terms of Use | Privacy Policy | Accessibility Policy © 2022 - TheUntz.com. All rights reserved.