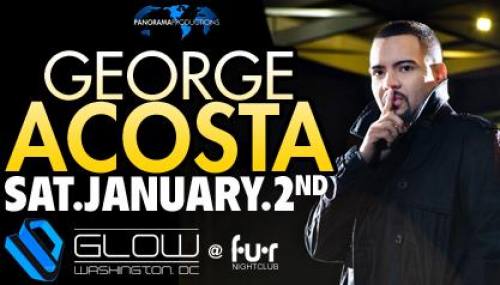 Panorama Productions presents
GLOW – Washington D.C. – www.ClubGlow.com
GLOW Saturdays at FUR Nightclub
GEORGE ACOSTA – Miami
(www.myspace.com/georgeacosta | www.georgeacosta.com)
Opening set
ROBERTO GONZALEZ
(GLOW-DC)
Miami-based DJ/Producer George Acosta begun spinning records while in his teens, emerging as a staple of the underground rave circuit thanks to his appearances at clubs including the Omen, Le Boom, Mach 1, XS Frankfurt, the Shadow Lounger and the Love Parade. The founder of his own Waxhead Records label, Acosta remixed everyone from b-52's to Ultra Nate in additiong to issuing his own records, which include 1997's Miami Beach Bash, Volume 2 and 2000's Awake. The double series Release: AM Edition and Release: PM Edition followed in early 2001. He and trance guru ATB collaborated on Trance Nation AMerica, Volume 2 later that summer.
Among the many current projects that bring Acosta around the world, perhaps the most exciting is his Mint Musik Digital music distribution company. As the advancement of digital technology speeds faster and faster, only those who embrace the digital age will survive. New artists and records are being signed to Mint Musik Digital in exclusive distribution deals, with news being announced soon.
Catch George Acosta on the radio each week across the U.S. during his “Lost World” show on SIRIUS SATELLITE RADIO, Area 33 (www.Sirius.com). In 2006, George Acosta broke DJ MAGAZINE’s annual “Top 100 DJs” poll at 59, alongside the world’s biggest DJs. Current remixes include an edit of Jon Secada’s “Window,” a track that charted in BILLBOARD MAGAZINE’s Top 20 upon its release.
NO line…NO wait…NO problem
**Purchase Advanced Tickets**
WWW.CLUBGLOW.COM
-The Main Room (House-Progressive-Trance)
-The Martini Room (Hip Hop-Old School, R&B)
-The Mink Room (Mashups, Hiphop, Top40)
-The Mafia Room (Latin Music)
-Heated Patio (Smoking Allowed)
Glow happens Saturdays at Fur Nightclub – 18+
33 Patterson St. NE Washington DC 20002
Web & tickets: www.ClubGlow.com // Info: 202-271-1171
Myspace.com/clubglowdc // Facebook: Glow Fan Page // Twitter: ClubGlow
BECOME A “FAN OF GLOW” ON FACEBOOK AND GET THE BEST DISCOUNTS TO ALL GLOW AND 4PLAY EVENTS!!!