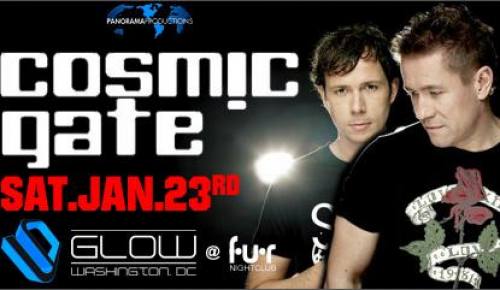 Panorama Productions presents
GLOW – Washington D.C. – www.ClubGlow.com
GLOW Saturdays at FUR Nightclub
COSMIC GATE – Bossi & Nic Chagall
(www.cosmicgate-music.de)
Opening set
ROBERTO GONZALEZ
(GLOW-DC)
Over 10 boundary-pushing years, Nic Chagall and Bossi have evolved Cosmic Gate into one of the most creative and highly-sought-after electronic music acts in the world. Revered uber-producers, their musical acumen has seen them become long-term favourites of the trance’s Big 5 DJs with their 3 hugely-received albums transporting anthems like ‘Body of Conflict’, ‘I Feel Wonderful’, ‘Analog Feel’, or the classics ‘Exploration of Space’ and Fire Wire to the dancefloor. As DJs, their kinetic, blood-pumping live performances are seen by hundreds of thousands of club and festival goers annually. Playing a 100 nights every year, it’s this ever-visible club presence that saw them reach their highest position to-date on the DJ Mag Top 100, landing at No.62 in 2008.
Following a chance meeting at a label office in Cologne in late 1998, the pair collaborated for the first time. It’s a production partnership that has become one of the dance world’s most successful and memorable. In their homeland of Germany, they’ve maintained a consistent level of chart success, with no fewer than 7 Top 40 singles to their name and a Top 10 hit in the UK in 2001, with the quintessential club hit, Fire Wire. Drawing on a broad-range of their individual musical tastes and influences, they’ve continued to advance and enhance the sound… Following up the long-players ‘Rythm & Drums’ and ‘No More Sleep’, in 2006 they released ‘Earth Mover’, which saw a seismic shift towards a more melodic and electronically orientated music. Including the club hits ‘Analog Feel', ‘Should Have Known’ and ‘I Feel Wonderful’, the long-player was IDMA nominated for Best Album of 2007 and was latterly seen as a new ‘year one’ for Cosmic Gate.
In 2009 Nic and Bossi are set to release their fourth studio album ‘Sign of the Times’, which contains 11 floor-monsters-in-waiting, last year’s vocal anthem ‘Body of Conflict’ and the latest smash single ‘Not Enough Time’, which in the words of Tiësto is “a great and solid vocal trancer that touches all your musical senses!” And in the broader scale on ‘Sign of the Times’ Armin van Buuren says “The new Cosmic Gate album is one of the most anticipated releases of this year. They are on the forefront of the dance music sound of the moment… Bring on 2009!”
Deck-side Nic and Bossi have whipped floors into frenzies all the way around the world. In 2008 they played Tiësto’s now-famous Monday nighter at Privilege in Ibiza, rocked roofs at the Judgement Sunday nights and decisively broke into the US and Australian clubbing scenes through a string of sell-out tours. They appeared in the DJ Magazine’s list of Top 100 spinners for 6 years now and are regular festival attraction, spinning at events like Trance Energy and Mysteryland in The Netherlands, Summadayze in Australia, Germany’s Nature One and Stateside at Nocturnal. In early 2009 they are set to roadblock the Freedom Festival with Tiësto in Malaysia and Sunrise in Poland.
Back2Back, Cosmic Gate’s on-going compilation series was devised as the at-home testament to the pair’s club-rocking exploits. 2007 saw the release of the 3rd volume through Tiësto’s Black Hole label. The compilations bring the evocative mix of trance, progressive and electro and stands apart through their use of numerous at-the-time unreleased productions and unique Cosmic Gate edits.
Over their production lifetime, the Cosmic Gate remixes have become almost as fêted as their productions. Essentially a blow by blow of trance music’s A-list, Nic and Bossi lent their studio know-how to productions by the likes of Tiësto, Armin van Buuren, Ferry Corsten, Above & Beyond’s OceanLab project, Rank 1 and Blank & Jones. Most recently they rewired Deadmau5’s ‘Clockwork’ to devastating effect and created two highly-praised remixes of ‘Vincent De Moor - Fly Away’ and ‘Veracocha - Carte Blanche’
NO line…NO wait…NO problem
**Purchase Advanced Tickets**
WWW.CLUBGLOW.COM
-The Main Room (House-Progressive-Trance)
-The Martini Room (Hip Hop-Old School, R&B)
-The Mink Room (Mashups, Hiphop, Top40)
-The Mafia Room (Latin Music)
-Heated Patio (Smoking Allowed)
Glow happens Saturdays at Fur Nightclub – 18+
33 Patterson St. NE Washington DC 20002
Web & tickets: www.ClubGlow.com // Info: 202-271-1171
Myspace.com/clubglowdc // Facebook: Glow Fan Page // Twitter: ClubGlow
BECOME A “FAN OF GLOW” ON FACEBOOK AND GET THE BEST DISCOUNTS TO ALL GLOW AND 4PLAY EVENTS!!!