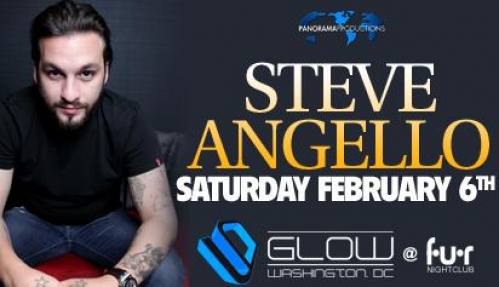 Panorama Productions presents
GLOW – Washington D.C. – www.ClubGlow.com
GLOW Saturdays at FUR Nightclub
Doors Open 10pm//OPEN BAR 10pm-11PM
Saturday February 6th 2010
***PURCHASE YOUR TICKETS HERE***
STEVE ANGELLO
(myspace.com/steveangello)
Opening set
RICH WEBB
(GLOW-DC)
It all kicked off for Steve Angello when he released 'Woz not Woz' alongside fellow Swede, Eric Prydz in 2004. It was released on CR2 Recordings and elevated Steve to become one of the most in demand producers, remixers and djs of 2005. This year alone has seen Steve have two top 5 club hits, remix the likes of Moby, Goldfrapp, Royksopp and Deep Dish, release a Subliminal Sessions cd, be nominated for 'Best Producer' at the House Awards, and also win the acclaimed 'Best Newcomer' (alongside partner in crime, Sebastian Ingrosso) at this years DJ Awards in Ibiza.
At 22 years old, Steve has earnt the reputation as a consistently fresh talent, a vehicle for which is his label, Size Records. Drawing heavily on influences such as Daft Punk and Carl Craig, Size Records was conceived in 2002, and has since had thirteen rollicking releases, most recent being the 2 hits, Who's Who? "Not So Dirty" aka Steve Angello and Full Blown 'Some kinda Freak'. The label has received massive support from the biggest dance superstars like Pete Tong, X-Press 2, Roger Sanchez, Funk D'Void, Carl Cox, Alex Neri, Norman Cook, Armand Van Helden, and Erick Morillo to name a few...
It was in early 2005 when Erick (Morillo) recognised the potential of Steve and Seb in signing them immediately to his Subliminal team... Steve and Seb went on to mix Subliminal Sessions 8 alongside Jose Nunez which was released in May 2005... this was to be one of the most popular Subliminal cds and would see Steve & Seb securing residencies at the infamous Subliminal parties at Pacha, Ibiza. If you have been lucky enough to witness one of their gigs, I am sure that it would be your Ibiza memory of the year!
Steve's highly charged sets have scored him thousands of adoring fans around the World! Djing every weekend non-stop for the last 12 months, his diverse sets keep the crowds electrified, and no matter how many times you see him play, you will rarely hear the same track twice! His ability to connect with the crowd is intense, and it is as if he reads your mind when you hear the bass drop of a track you have been waiting all night to hear. The music screams at you; passion; commitment; dedication; focus; drive; and energy: music is no idle pastime for Steve, it's everything. It's hard to believe that the quality of the music comes from someone so young but Steve pulls it off.
In addition to all this, Steve's appeared on Radio 1 with Pete Tong earlier this year, and has since been asked back to record an exclusive Essential Mix with Sebastian to be broadcast in September. This is further to Steve featuring on the 3G Tong Mobile Show, where he was labelled a hero of 2005. Being no stranger to this accolade, Steve says, "I'm just lucky to be doing what I'm doing. If I didn't have the music I don't know where I would be today. I'm just happy and trying to enjoy life!"
So what does the future hold for this remarkable young man? Lets just say, a continual release of amazing top quality tracks on the Size label, a possible compilation cd to be released next year, an album with his partner Sebastian, and a remix of the Eurythmics classic "Sweetdreams".
Whatever it is, the future sure is bright...
-The Main Room (House-Progressive-Trance)
-The Martini Room (Hip Hop-Old School, R&B)
-The Mink Room (Mashups, Hiphop, Top40)
-The Mafia Room (Latin Music)
-Outdoor Patio (Smoking Allowed)
GLOW happens Saturdays at Fur Nightclub – Ages 18+
33 Patterson St. NE Washington DC 20002
Web & tickets: www.ClubGlow.com // Info: 202-271-1171
Myspace.com/clubglowdc // Facebook: Glow Fan Page // Twitter: ClubGlow
BECOME A “FAN OF GLOW” ON FACEBOOK AND GET THE BEST DISCOUNTS TO ALL GLOW AND 4PLAY EVENTS!!!