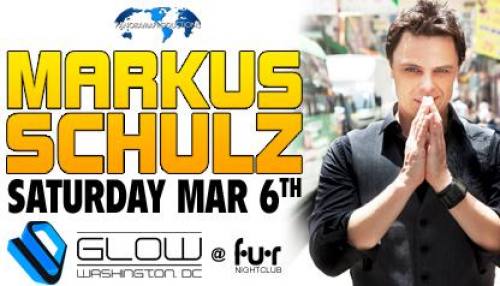 Panorama Productions presents
GLOW – Washington D.C. – www.ClubGlow.com
GLOW Saturdays at FUR Nightclub
Doors Open 10pm//OPEN BAR 10pm-11PM
Saturday March 6th 2010
***PURCHASE YOUR TICKETS HERE***
MARKUS SCHULZ - COLDHARBOUR
(www.markusschulz.com, www.davidlewis.nl)
Opening set
ROBERTO GONZALEZ
(GLOW-DC)
The rise to great success with most top DJs starts with a dedication born out of an obsession for music. For Markus Schulz, his story was no exception. Originally from Germany, Markus moved to the USA aged 13 and quickly become engrossed in the break-dancing scene of the time. Although a talented mover on the floor, a chance to dominate the decks at a breaks party he helped organise became the pivotal moment when Markus decided upon the path of his life's work. That dedication has since seen him storm up the charts to take his current place at number 8 in the prestigious DJ Mag Top 100 DJ poll 2008 - a position surely set to rise in 2009.
Markus always had a desire to meet the world and has continued to tour globally over the past few years, bringing his unique brand of progressive and melodic trance to thousands of clubbers from as far afield as Australia to Russia and as far away as China and Trinidad, that combined with criss-crossing in his own country of the USA. Markus also dominates the airwaves with his weekly radio show, Global DJ Broadcast and can be heard in over 30 stations worldwide. His very special "Ibiza Summer Sessions" debuted in summer 2006 to rave reviews. Wanting to give the listener the feeling of being part of the Ibiza summer, Markus planned each week with the hottest music and best DJ's from the Balearic Islands. The mission was to bring Ibiza to those who couldnt be there and to add to the experience of those who were. And it worked, with new stations around the world grappling to sign the show for their listening audiences. Through his radio show, Markus was able to reach out through the airwaves and meet even more people, thus touching their lives with his music.
Markus has built himself a stellar reputation as one of the global leaders in production as well as a world renowned DJ. His own label, Coldharbour Recordings has delivered over 60 A-list releases within 3 years. His commitment to his own work as well as his peers has seen numerous solo, collaborative and remix projects that have enabled him to boast an unrivalled discography, largely inspired by his travels and the people he has met. With his heart at the soul of every project, Markus consistently delivers hit after hit, most notably with 'Without You Near', 'Daydream', 'Perfect', and his latest chart stormer 'The New World ' the booming trancer and theme tune to the infamous Transmission party that has clearly set the tempo for 2009 on fire!
Following phenomenal success with Miami '05, Ibiza '06 Markus continued his city inspired series to deliver us the hugely successful Amsterdam 08, which has been nominated for Best Full Length DJ Mix at this years IDMAs taking place at the annual Winter Music Conference. The nominations dont stop there - hes also up for Best American DJ for the second year running could this be his year? Next up, Markus continues his musical tour of the world with this year's Canadian inspired 'Toronto 09', a mind blowing belter that celebrates the community spirit within the clubbing scene of the city. 2008 saw Markus release Progression Progressed, a rare reworking of his album Progression 2007 that brought together a collection of interpretations by some of the most talented producers on offer including: Mat Zo, Nic Chagall, Mark Otten and Monogato, as well as an inspired collection of remixes and new tracks from Markus himself. Toronto '09 gives Markus the opportunity to bring his experiences from his tours and inspiration from his audiences to all fans worldwide with his unique stamp on things.
Schulzs steadily growing collection of awards is testament to his influence on the dance music community, and ever increasing popularity. His relentless determination to bring new sounds and new experiences to his audiences and fans worldwide demonstrates a passionate enthusiasm that knows no bounds and firmly sets Markus up as one of THE forces to be reckoned with in dance for 2009 and beyond!
Stay tuned, his story has only just begun...
-The Main Room (House-Progressive-Trance)
-The Martini Room (Hip Hop-Old School, R&B)
-The Mink Room (Mashups, Hiphop, Top40)
-The Mafia Room (Latin Music)
-Outdoor Patio (Smoking Allowed)
GLOW happens Saturdays at Fur Nightclub – Ages 18+
33 Patterson St. NE Washington DC 20002
Web & tickets: www.ClubGlow.com // Info: 202-271-1171
Myspace.com/clubglowdc // Facebook: Glow Fan Page // Twitter: ClubGlow
BECOME A “FAN OF GLOW” ON FACEBOOK AND GET THE BEST DISCOUNTS TO ALL GLOW AND 4PLAY EVENTS!!!