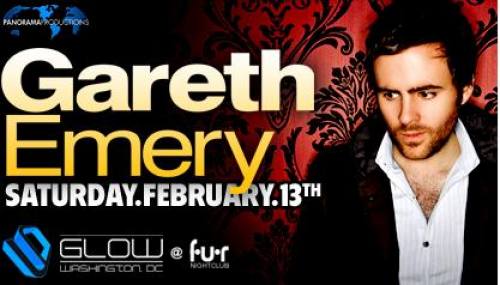 Panorama Productions presents
GLOW – Washington D.C. – www.ClubGlow.com
GLOW Saturdays at FUR Nightclub
Doors Open 10pm//OPEN BAR 10pm-11PM
Saturday February 13th 2010
***PURCHASE YOUR TICKETS HERE***
GARETH EMERY- Garuda
(www.garethemery.com)
Opening set
ROBERTO GONZALEZ
(GLOW-DC)
Whether it was his critically acclaimed debut on the BBC Radio 1 Essential Mix, or his rise to number 23 in the definitive DJ Mag Top 100 Poll, there wasn’t much that didn’t go right for Gareth Emery in 2008, a year that saw him become increasingly established as one of the most innovative, unique, and exciting figures in modern dance music. With his numerous world-class productions topping charts everywhere, and his explosive DJ sets continuing to pack out clubs across the globe, you could be forgiven for thinking he’s a long-established dance music old hand. Well he’s not: he’s 28, and as it happens, he’s only just getting started.
Writing and playing music is fundamental to Gareth Emery. His first gigs were at the age of 4, when despite never having lessons, he turned out to be so handy on the piano that his teachers insisted on him taking over the duties in school assembly. At 15, he found himself neglecting classical music training to sneak out to play guitar in a local indie band so ahead of their years that they found themselves headlining Southampton’s music pubs despite all being underage. And at 22, whilst on holiday in France, fiddling with a £500 laptop and wondering what he was going to do with his recent politics degree, he wrote his first electronic classic: the seminal ‘Mistral’. Plenty more were to come.
Since then, the passing years have been pretty good to this young Brit. His relentless touring schedule now sees him banking around 250,000 air miles every year, unequivocally demolishing dancefloors at the world’s finest clubs and festivals. You’ll find him at global superclubs like Home in Sydney, Zouk in Singapore, The Guverment in Toronto and Amnesia in Ibiza. You’ll find him at festivals like Holland’s legendary 30,000 strong Trance Energy and Belgium’s Tomorrowland. And you’ll also find him at the likes of Godskitchen and The Ministry of Sound in his native UK. In short, his unique, distinctive style is one that’s got people talking, with events in over 25 countries a year a testament to his exploding worldwide popularity.
Today, in the Emery studio, it’s all about innovation, setting benchmarks, and challenging perceptions. Constantly escaping categorisation, his productions, (which are composed, produced, and engineered entirely by him), span the worlds of trance, progressive, electro, techno, and a few other places. Languid, spacey grooves, juddering basslines, killer melodies, and hooks that take your breath away mean that it’s a given that Armin, Tiesto, Oakenfold, and Judge Jules have all been fully paid-up members of the Emery fan club for years, while both Ferry Corsten and Paul van Dyk have tipped him as a future star.
Constantly ahead of the game, Gareth was one of the first DJs to embrace podcasting when he launched The Gareth Emery Podcast in early 2006. The antithesis of long drawn-out DJ mixes, the show soon became the essential download for switched on, savvy dance music fans, with each short but sweet episode providing a mouth-watering expose of the fortnight’s best music. Its success hasn’t gone unnoticed by the industry either, being nominated for ‘Best Podcast’ at the Miami IMDA awards every year since the category was introduced.
With a list of achievements already far surpassing most DJs ten years his senior, Gareth Emery could easily sit back and be content with his lot, but you get the feeling that won’t be happening. His 2009 plans encompass a staggering amount of new projects, including his debut artist album: a long-awaited opus full of completely new material, and Garuda, his new record label and events brand he’s launching after previously heading the much-missed Five AM imprint.
Listening to him speak about Garuda tells you all you need to know about the Emery ethos: “I don’t care if we release two records a year or ten, as long as each one utterly blows me away”. And as long as the music passes his impossibly high barometer of quality, he isn’t even bothered if it sells, although given his flawless record of producing and signing tracks that top DJ and sales charts everywhere, you rather suspect they will. “It’s about nothing more than hunting down the most incredible, life-changing music out there, and trying to give as many people as possible across this planet a taste of it”. And that’s what it’s all about, right? See you down the front.
-The Main Room (House-Progressive-Trance)
-The Martini Room (Hip Hop-Old School, R&B)
-The Mink Room (Mashups, Hiphop, Top40)
-The Mafia Room (Latin Music)
-Outdoor Patio (Smoking Allowed)
GLOW happens Saturdays at Fur Nightclub – Ages 18+
33 Patterson St. NE Washington DC 20002
Web & tickets: www.ClubGlow.com // Info: 202-271-1171
Myspace.com/clubglowdc // Facebook: Glow Fan Page // Twitter: ClubGlow
BECOME A “FAN OF GLOW” ON FACEBOOK AND GET THE BEST DISCOUNTS TO ALL GLOW AND 4PLAY EVENTS!!!