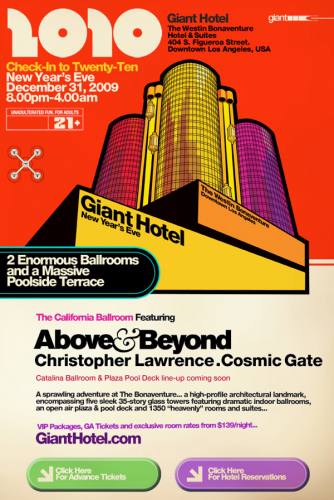 Talent:
Above & Beyond, Christopher Lawrence, Cosmic Gate
Info:
"GIANT Hotel" New Year's Eve Celebration 2010... Check-in to Twenty-Ten with Above & Beyond, Christopher Lawrence, Cosmic Gate and more to be announced. A sprawling adventure at The Bonaventure... a high-profile architectural landmark, encompassing five sleek 35-story glass towers featuring dramatic indoor ballrooms, an open air plaza & pool deck and 1350 “heavenly” rooms and suites.
Only 5000 Tickets (including both VIP and GA) will be sold for this exclusive event. Tickets are sold separately from rooms and suites at the Bonaventure. Book your room(s), starting at only $139/night, via gianthotel.com.
Stay 2 nights (New Year's Eve Night and New Year's Day Night) and enjoy complimentary access to our Official GIANT HOTEL New Year's Day Event, "DeCompression," at the Lakeside Lobby Bar and Lounge of the Bonaventure on Friday, January 1, 2010 from 9pm onwards.
VIP TICKETS ARE AVAILABLE: “Check-In to Twenty-Ten” with style! VIP Ticket Holders enjoy EXPRESS ENTRY and PREMIUM OPEN BAR in separate VIP Stage Side Lounges in each Ballroom and on the Plaza Pool Deck, Complimentary VIP Access to "DeCompression" on New Year’s Day (see above) and more.