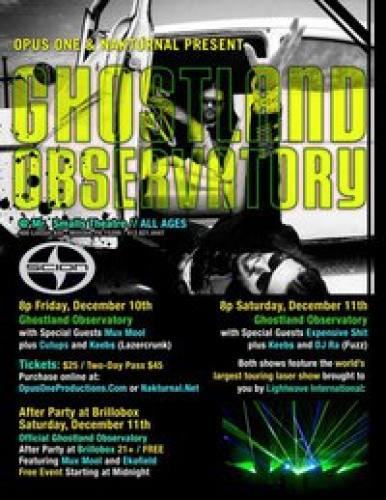 Mashing together electro, rock, and funk while taking cues from such artists as Daft Punk and Prince, Ghostland Observatory consists of Aaron Behrens on vocals/guitar and Thomas Turner on production/beat-making. Ghostland Observatory spend countless hours in their south Austin studio, but their live show has blown minds from coast to coast with their unique style and awe inducing live laser show, meticulously timed to their musical performance.

Both shows feature the world’s largest touring laser show brought to you by Lightwave International.

Simply RSVP as Attending for a chance to win a pair of tickets! We give away tickets to one different show each week via the Opus One Facebook Page's events:

or at all Opus One Ticket Outlets - http://mrsmalls.com/NewPHP/home.php?section=ticketoutlets

FREE EVENT: After Party at Brillobox