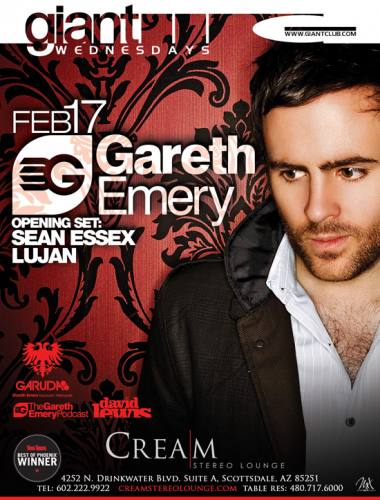 Only a select few dance music artists rise from obscurity to international recognition in under a year, but that's exactly what 23 year old Southampton based DJ / producer Gareth Emery did in the last twelve months. Coming from a diverse musical background which encompassed classical piano training, jazz, and punk-rock along the way, Gareth initially caught the attention of the dance music scene in early 2002 with his first release. The track, titled ‘Nervous Breakdown 2002’, was a white label bootleg of The Shrink's infamous classic which found its way onto BBC Radio 1 after being supported by a host of DJs including Eddie Halliwell, Guy Ornadel and Dave Pearce. It was immediately picked up by Nutrition for an official release and later featured on a number of compilations including the Godskitchen Direct mix album. The track that truly put Gareth on the production map was GTR – ‘Mistral'. Never destined to become an anthem, it was produced entirely on a laptop computer over the course of a two week holiday in Provence. Nevertheless, the sole CDR that Gareth sent to Paul van Dyk caused such a storm when van Dyk debuted it live on radio from the Nature One Festival, that Five AM records wasted no time in signing it, helping it to become a truly global trance anthem. Unequivocally supported by DJs including Tiesto, Ferry Corsten and Armin, it not only had immediate appeal but also passed the test of time, and could still be heard in superclubs a year after it was made. It later went on to feature on a large number of compilations, including Ferry Corsten’s Washington World Tour, Technics DJ Set volume 19, Total Trance on Moonshine USA, Graham Gold GG01, and was also significantly chosen by the newly crowned no.1 DJ in the world, Tiesto, to end CD1 of his critically acclaimed ‘Nyana’ album. So far in 2003, Gareth has maintained a steady flow of productions as GTR, Gareth Emery and Cupa whilst undertaking high-profile remix work for major labels Multiply and Lost Language. He has also collaborated with other artists including CERN, Harry Diamond, and most recently Godskitchen’s Jon O’Bir. Having just finished setting up a new studio in his Southampton home, followers of forward-looking trance music have a lot to look forward to. Production is only one side of Gareth Emery’s appeal. As a DJ, his unique and individual brand of intelligent trance continues to gain recognition for pushing the boundaries of uplifting electronica. Since signing to the exclusive management agency DJ Connections in early 2003, he has appeared at UK superclubs Godskitchen and Slinky, headlined Passion on his first appearance at the club, and gained a reputation for being one of the most exciting DJs to break through in recent years. In addition to this success in the UK, his status as an international DJ has grown dramatically, with bookings in Sweden, Holland, New Zealand, Australia and Canada lined up this year. As Mixmag wrote when they first tipped Gareth for success in late 2002: “boring DJs beware: Gareth Emery is about to kick your arse”, and they certainly weren’t wrong.