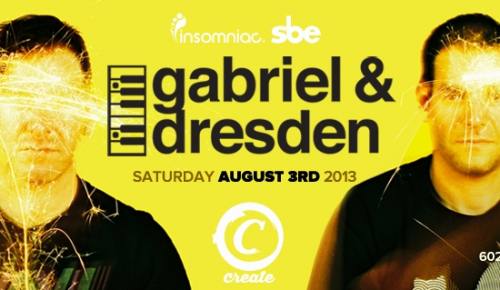 What: Gabriel & Dresden with Sonny Wharton at Create Nightclub


In 2001, Josh and Dave joined forces under the now legendary Gabriel & Dresden moniker. Within their 6 years of collaboration, Gabriel & Dresden scored 19 number 1 Billboard Hot Dance/Club Play remixes and tracks, made three DJ-mixed compilation albums, an artist album and won seven International Dance Music Awards. Their tracks 'Arcadia', 'Dangerous Power', 'Let Go', 'Tracking Treasure Down' Andain "Beautiful Things" and numerous other masterpieces have turned into some of EDM’s biggest classics. 'As The Rush Comes', by their Motorcycle alias with Jes Brieden, they won the IDMA award for 'Best Progressive Trance Track' as well as peaking at #11 on the official UK top40 charts. The G&D treatment, through remixes and interpretations, was given to tracks by The Killers, Annie Lenox, Sarah McLachlan, Dido, Tiësto, Paul Oakenfold and Way Out West, making their sound cross borders from trance and progressive with pop, indie and soul sensibilities.


Sonny Wharton has emerged in the past couple of years as one of the brightest prospects in the UK. Described by The Shapeshifters as “one of the most prolific producers out there” he’s remixed the likes of Fatboy Slim, Frankie Knuckles and The Temper Trap. Releasing singles on Size, Toolroom, Spinnin’ and Skint Sonny has received regular support from house music heavyweights Pete Tong, Steve Angello, Roger Sanchez and Mark Knight whilst continuing to push his own label Whartone Records and dominate the download charts.
About | Advertise | Contact | FAQs | Terms of Use | Privacy Policy | Accessibility Policy © 2021 - TheUntz.com. All rights reserved.