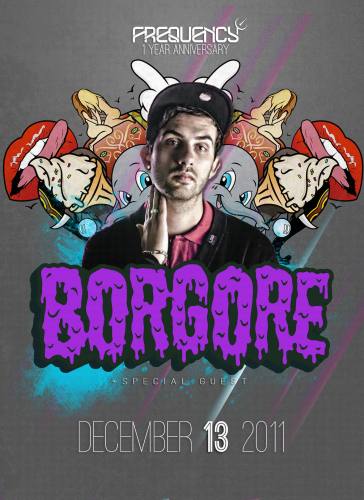 This December, FREQUENCY is celebrating one insane year of bringing the bass to Las Vegas! We're coming with a brand new 18+ venue and a fresh sound system to break in! We want to sincerely thank the local (and regional) bass music scene(s) for supporting us in our quest to put Vegas dubstep on the map, and we can't wait to unveil what's coming next. For now, it's our one year bash - come rage!

Since the worldwide explosion of the Dubstep genre, Borgore has catapulted himself to the forefront, becoming one of the most recognizable (and notorious) names in the bass music scene. Whether touring in Europe, North America, Australia or even New Zealand, Borgore had sold out at the box office over and over again where ever he goes. With over 6 millions views on Youtube, a vast fan base on social networks such as Facebook or being featured on soundtracks for TV shows such as ‘Skins’. He now runs his own record label ‘Buygore’ and had featured releases and remixes for many well known international artists. Borgore goes from strength to strength and has only just scratched the surface.

For Los Angeles bassline technician BARE, aka Sean Rodela, 2010 will be fondly remembered as the year his twisted face melting sickness exploded into a worldwide epidemic. Taking the dubstep scene by storm with his staggering studio output and electrifying live performances, there is no question BARE has clawed his way into the ranks of the bass music elite - and he’s not going anywhere. If you don’t know, time to get to know…

One of the most consistent lyricists in the bass music game since day one... Messinian's pitched down hooks and verses can be found in literally dozens of tracks on Beatport's top 100. But he's not stopping there. This December 13th Messinian will step up to the decks to personally unleash his new material on the unsuspecting dancefloor...get ready!

+ Much more to be announced!

ONLINE TICKETS ARE AVAILABLE ON THE FREQUENCY EVENTS FACEBOOK:

First batch of presales $20, they will go fast!

OR FOR CASH & NO FEES THROUGH OUR PROMO TEAM:

^ Hit up any of these people to pick up presales!

Get your presales early, prices will increase at the door!

* NO DRESS CODE - Come as you are! But please leave backpacks at home!

*BE SAFE - ARRANGE A RIDE AHEAD OF TIME*