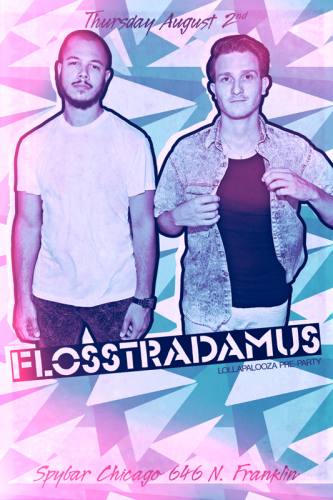 Hometown heroes Curt Cameruci and Josh Young -aka Flosstradamus- pay their inaugural visit to Spybar having headlined Lollapalooza earlier that day. Let the after parties begin!

FLOSSTRADAMUS (U.S.)
Curt Cameruci (aka Autobot) and Josh Young (aka J2K) began the Flosstradamus project as a series of DJ parties in their hometown of Chicago. Word of mouth about their eclectic mashup of electro, house, minimal techno, and sleazy R&B quickly spread, and their parties often would sell out at a moment's notice. Their monthly party continued to be a heavy draw during the mid-2000s, with people from all over the nation traveling to Chicago to experience their performances. ~ Rob Theakston, All Music Guide
More info - http://www.artistdirect.com/artist/flosstradamus/3761976

CHECK US OUT online - http://www.spybarchicago.com/