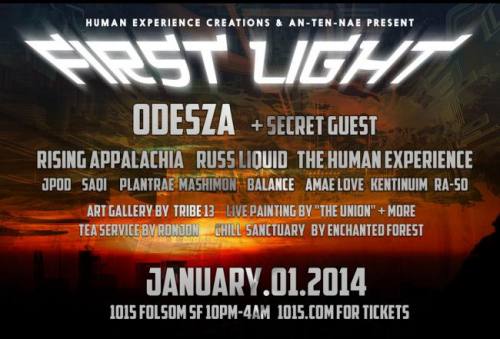 
ODESZA is a production duo made up of Harrison Mills (Catacombkid) and Clayton Knight (BeachesBeaches) based out of the Pacific Northwest. They met their senior year of college and decided to spend the summer as recent graduates collaborating on an album. On September 5th, 2012 they self-released a free LP entitled “Summer’s Gone”, creating a delicate balance between dreamy sun trickled melodies, glitched out vocals, crunchy drums and large sweeping basslines. To much critical acclaim, "Summer's Gone" has had more than 1.6 million streams on SoundCloud and gained ODESZA a diverse and loyal fan base.


“If first impressions are everlasting, ODESZA has successfully made a strong opening statement.” - Earmilk.com


“ODESZA possesses a very impressive sampling prowess, combined with flawless sound production and an innate ability to refix anything to sound amazing.” - Threadsence.com


Sisters Leah and Chloe tear into sound with sensual prowess as stages ignite revolutions and words light up spirit fires. Listen to their beautiful sound for poetic harmonies, soul singing, spoken word rallies, banjos, fiddles, many beats of drums, kalimbas, washboard rants, groove, and community building through SOUND. Joined by Imhotep on the New Orleans bass drum, Abram on contra bass, and Forrest on the beats, their style redefines performance. With a host of versatile collaborators on board expect anything from trumpet to beatboxing, poets to trapeze, and circus to burlesque. Rising Appalachia uses sound as a tool to spark a cultural evolution and birth a new movement, creating soul sounds for us all....


Having toured over 14,000 miles across the United States and gracing many stages around the world, Rising Appalachia’s vision and sound is quickly proving to be contagious to everyone it touches. Their shows have included and array of community-run venues and collective events, as well as the Kennedy Center in Washington DC, National Public Radio All Songs Considered, The School of Americas Vigil, Nunez Arts Festival New Orleans, Emory University Schwartz Center, The Floyd Festival, The Beacon Theater NYC, The Lake Eden Arts Festival, Radio Popular Italy, Guerilla Radio Amsterdam, The Edinburgh Fringe Festival, The Highlander Center 75th Reunion, and many more.


Rising Appalachia has been voted “Green Album of the Year” by the Huffington Post, “Atlanta's Best Folk Act” by the Creative Loafing, and have been written about in Paste Magazine, The New York Times, Performer Magazine, Dirty Linen, Sing Out, Anti-Gravity, Maverick and more. Their tours have taken them across Europe, through the Caribbean, into Central America, into the Indian subcontinent, and across the United States- making sacred sounds and elaborate stages wherever they go. They are creatively committed to keeping their work accessible at the local street level as well as expanding to larger audiences abroad, and have continued to maintain autonomy by self-managing, recording, producing, creating, and directing their work. They are greatly honored to do the work that they do.


Russ Liquid is the future-vintage groove-blasting maestro who has stirred the souls and minds of the electronic music world. Renowned for his ingenious compositional approach, this cosmic virtuoso and imprints a prophetic musical experience on his audiences. He detonates explosive beatscapes, seamlessly adding flourishes of instrumental color and emotion; all while drawing from an endlessly diverse sonic palette.


In only a short time, Mr. Liquid has developed a reputation for radiating a sonic supernova of genre-bending beats on the dancefloor, captivating audiences with passionate live instrumental performances across the U.S. and beyond. In 2012, the member of the Headtron crew’s dynamic, multi-instrumental, experience was unleashed on some of the most innovative events and festivals around the globe including: Coachella, Symbiosis Gathering, Lightning In A Bottle, Shambhala, Sonic Bloom, Envision Festival (Costa Rica), and Eclipse Festival (Australia).


In February of 2013, Russ resumes his destiny to break musical boundaries and transcend expectations with Foreign Frequency, his debut full length album on STS9‘s 1320 Records. Foreign Frequency transports listeners on an inter- dimensional adventure to the deepest circles of his musical universe, steering audiences into an expansive world of visceral beats, laced with spiraling instrumental accompaniments, and adorned with melodies that only a masterful improvisationalist could manifest.


David is constantly pushing the boundaries of live electronic music. Playing, composing, and conducting his own electronic symphony live on stage, his performances are brimming and layered with human emotion, world exploration, and sacred sounds. Whether performing by himself, or with a live band, “The Human Experience” always delivers an emotionally charged show.


“The Human Experience” aims to cross cultural barriers through music. David has collaborated with artists all over the world including Ignacio Perez (Buena Vista Social Club), William Close (The Earth Harp), Random Rab, Govinda, Amae Love, Rising Appalachia, and many others.


Since his debut album “Inaudible Sounds” in 2010 , he has released four other albums in the last two years and has four new projects planned for release in 2013. Each song is a sonic journey; interweaving psychedelic layers of melody and harmony with organic grooves and international vibes.


Composing and performing live with the Audio/Visual/Dance projects “Phadroid” (Andrew and Phaedra Jones), “Quixotic”, “Lucent Dossier”, and “Seraphim” David is expanding his sounds into the mixed media world.


Since 2010, David has performed all over the world sharing the stage with renowned artists such as, Thievery Corporation, Bonobo, Tipper, Random Rab, Emancipator, Bluetech, Kalya Scintilla, and Kaminanda.


Over the last three years he has toured in England, Portugal, Germany, Russia, Israel, Costa Rica, Mexico, Guatemala, Canada, and all over the United States at a variety of events including festivals like Boom, Burning Man, Lightning in a Bottle, Satya, Symbiosis, and Envision.


David is consistently redefining himself as an artist, performer, and human being. Moving and traveling around the world, meeting people from all walks of life and realms of consciousness, he is continually learning, growing, and sharing inspiration with those around him.