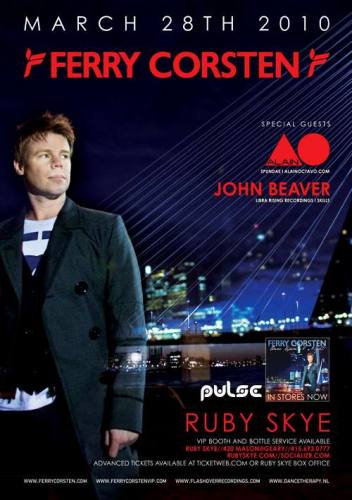 Ruby Skye & Spundae Present
FERRY CORSTEN
Sunday, March 28
Ferry Corsten. 4 December 1973, Rotterdam City, The Netherlands.
A pioneer and a dynamic force in the electronic dance music industry, Ferry Corsten never ceases to amaze, awe and even challenge his music contemporaries with the zest and talent he has in his productions and musical sets. He is widely recognized for opening the floodgates of Dutch producers and DJs to the international music scene.
Known for the countless aliases he has produced and remixed under since the release of his first record at the age of sixteen, Ferry Corsten has remained steadfast in pursuing his dream of spreading his unique sublime sound to music lovers worldwide. In his quest, he has gained not only respect in the music industry he has built around him but in similar musical genres as well.
After initially producing some underground club tracks Ferry became more interested in clubhouse and trance. In 1996 Ferry achieved his first chart position in the UK single chart at #46 with 'Don't be Afraid' by Moonman, his first major and European breakthrough as a solo dance Artist, producer and composer.
Since Then, Ferry Corsten is the only electronic dance music artist to achieve the highest number of dance singles in the UK charts and currently has 10 gold singles in his studio.
Through the success of his production skills, he has also produced the Japanese Popstar, Ayumi Hamasaki's single Connected in her latest album, which has sold 4 million albums to date (2003).
Similarly, he has been nominated and has a won numerous awards in the past few years. Ferry Corsten has been elected as 'Producer of the Year' during the Ericsson Muzik Awards in London (1999), leaving fellow-nominees like Puff Daddy and Rodney Jerkins behind him. In 2000 in his home country Ferry got awarded the prestigious Silver Harp award for his outstanding contributions made to Dutch dance music. He is nominated in this year's (2004) Winter Miami Music Conference for best International Dj and Best Compilation (Ferry Corsten: Mixed Live) and Best National DJ and Best Video (Rock Your Body Rock) for the TMF (Dutch MTV) Awards in the Netherlands (2004).
Aside from producing, Ferry began compiling and mixing the Trance Nation (1999-2001) series together with Ministry of Sound which has sold over a million copies worldwide.
2004 is a culmination of his work as a producing artist and dj. The launch of his artist album Ferry Corsten: Right of Way at the Heineken Musical Hall (Netherlands2003) where 4,500 clubbers came to be with Ferry in a special 8 hour set, in The Netherlands is a testament to his goal in combining his artistic skills as a producer and a DJ on an international scale. From this album, hit singles such as It's Time, Punk and Rock your Body Rock have been released. Rock Your Body Rock debuted on number 11 on the UK Charts (February 2004). Remixes of this single were made by Moby and Renee Pilgrim.
Aside from the release of his artist album, 2004 has brought the release of compilations such as Dance Valley's 10th year anniversary and first of the series Euphoria Infinite. This year he has also remixed singles such as Stonebridge Freak On and Duran Duran's single Sunrise which hit the top 10 charts worldwide!
Join him in his musical journeys, be it with his current or past artist albums, a night out with him in your favorite club, or on the radio. 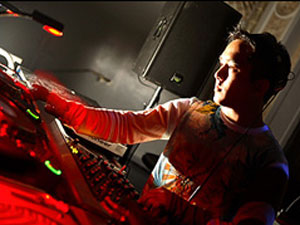