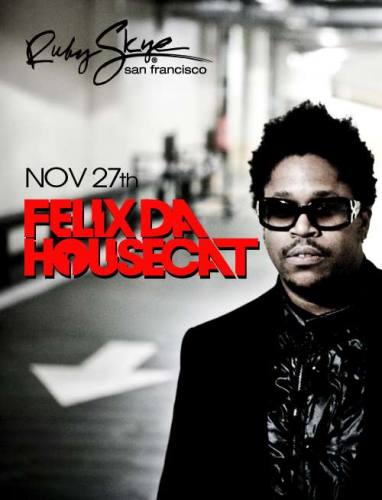 
Second-wave Chicago house impresario Felix Da Housecat entered the elite via his recordings (as himself, Thee Maddkatt Courtship, Aphrohead, Sharkimaxx) as well as his ownership of Radikal Fear Records, one of the premiere Chicago labels of the 1990s. An introduction to Chicago legend DJ Pierre during the mid-'80s gave the 15-year-old Felix Stallings, Jr. the kickstart he wanted, and with some help from Pierre, he produced his first single Phantasy Girl in 1987.


His parents discouraged his growing club lifestyle, however, and after high-school graduation Stallings left the scene entirely to attend Alabama State College. Over the course of a few years, he lost all interest in house music, though his girlfriend got him back into it. After calling DJ Pierre (who had moved to New York's Strictly Rhythm label), Felix began mixing and producing again. By 1992, he had a hit with the single Thee Dawn on Guerilla Records. His popularity soared in Europe, and the following year's By Dawn's Early Light and Thee Industry Made Me Do It cemented his reputation.


Not long after Stallings formed Radikal Fear Records, the label became one of the top house imprints in the world, thanks to releases from Mike Dunn, DJ Sneak, and Armando as well as Felix himself. During 1995, he released his debut full-length Alone in the Dark (as Thee Maddkatt Courtship) on Deep Distraxion. Hot on its heels came the label collection Radikal Fear: The Chicago All Stars and a Housecat DJ album titled Clashbackk Compilation Mix. Another production LP, Metropolis Present Day? Thee Album, followed in 1998. One year later, Stallings appeared extra busy; in addition to his first album as Aphrohead, he also released another Maddkatt Courtship LP, the highly praised I Know Elektrikboy. 2001 saw the release of Kittenz and Thee Glitz, a highly praised LP that helped him gain mainstream exposure through articles in glossy magazines across the globe -- not to mention remix work for the likes of Madonna and Kylie Minogue. The proper follow-up, Devin Dazzle and the Neon Fever, didn't arrive until well over two years later, but Stallings put together a pair of mix albums (2002's Excursions and 2003's A Bugged Out Mix) during the intervening years.