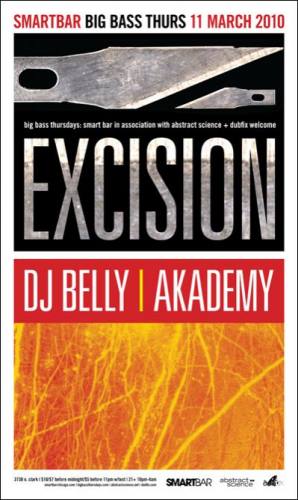 abstract science and dubfix present
EXCISION [rottun recordings, british columbia] - http://www.myspace.com/excision
DJ BELLY [fresh kid, 217mafia] - http://www.myspace.com/kevstoast
AKADEMY [noise floor crew, opaque project] - http://www.myspace.com/akademydub
smartbar - 3730 n. clark
10p-4am | $10/$7 before midnight/$5 before 11pm w/txt | 21+
smartbarchicago.com | bigbassthursdays.com | abstractscience.net | dubfix.com
abstract science and dubfix are proud to welcome the chicago debut of canada's EXCISION, alongside the return of 217mafia's DJ BELLY and the smartbar debut of the mystery man know as AKADEMY.
------------------------------
EXCISION
combining the morphing bass lines of drum and bass, the aggressive energy of metal, and the laid back vibes of hip hop, EXCISIONS’s infectious style has driven him to become one of the most wanted dubstep acts in north america. after selling out and repressing his first 12" release in 2007--on EXCISION's own rottun recordings--the demand for the dark side of dubstep became tangible. it's an ever growing demand, with EXCISION and rotten releases dominating the top ten sales charts at beatport and other digital retailers and crossing over to new audiences. look out for collaborations with BASSNECTAR, PENDULUM, dn'b heavy-weight SPL, and dubstep womp master DZ. at the age of 22, this young canadian is one to watch: don't miss EXCISION's chicago debut!
http://www.myspace.com/excision
DJ BELLY
cutting his teeth in the party-friendly sister cities of champaign-urbana--home of the university of illinois--dj belly aka kevin miller has built an impressive resume in a few short years: opening up for THE ROOTS, WU-TANG CLAN + PSALM ONE and as part of the 217mafia crew, bringing the sounds of dubstep downstate with their massive "dubstep massacre" parties. with the move upstate to chicago, dj belly looks bring his take on dubstep and hip-hop to a new level.
http://www.myspace.com/kevstoast
AKADEMY
Outside 4th century BC Athens, in grove of sacred olive trees dedicated to Athena, Plato's Akademia flourished. So named in honor of the Athenian hero, Akademos, the great thinkers of the era, convened to progress their fields of study. Today, Chicago dubstep producer, aKademy is steady making advances in a different and altogether darker set of arts and sciences. Akademy's early work with New York City's Proper Villains (Southern Fried/Nightshifters/Flamin' Hotz) showed immediate promise and piqued wide interest in his work from many of the strongest voices for the movement. Yet the identity of Akademy remains publicly unknown. With notes ranging from Squarepusher to Pantera informing his style (in addition to the more traditional elements of dubstep) his first single "Darknesses" wove these ideas into a compelling first glimpse at the future of a genre. Now busy at work, crafting his next missive, aKademy's pupils remain rapt in attention, awaiting the next lesson.
http://www.myspace.com/akademydub