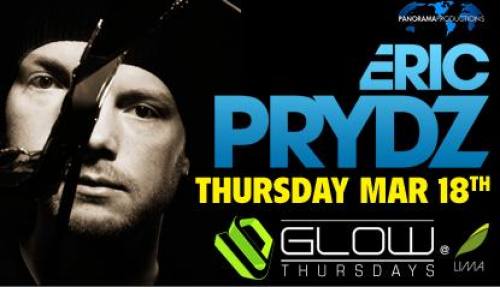 Panorama Productions presents
4PLAY – Washington D.C. – www.ClubGlow.com
Thursdays at LIMA
Thursday March 18th 2010
ERIC PRYDZ
(www.myspace.com/ericprydz)
Opening set by
RICH WEBB
(GLOW-DC)
Eric Prydz is on a roll at the moment, without doubt leading the way. His labels Mouseville, Pryda, & Pryda Friends are positively brimming with underground club hits. Eric is now in charge of three highly respected labels whose releases are in feverish demand, consistently selling huge quantities of vinyl which is truly incredible in the markets current climate. The labels are arguably proving to be the most successful and forward thinking imprints currently existing.
Each label was strictly developed to give Eric a platform to release his own productions without outside interference, simply his music on his terms. It was important for Eric to step back after his previous successes and release music without schedules and pressure. Ultimately he wanted to control his own image & destiny, something extremely important to him and his career.
The ethos behind the labels was truly underground, scarcely any promotion, no press intrusion and true label/design identity… a formula which has proven massively successful!
Releases on his more hard-edged Mouseville Records under the pseudonym Cirez D have been tough and powerful a throw back to the underground techno roots his native Sweden has become so famous for. The huge demand for this label has been nothing short of amazing with his massive ‘Knockout EP’ selling over 18,000 copies on vinyl alone. The more melodic based Pryda imprint showcases his early house influences with harmonies, melodies and hooks fused with his trademark powerful basslines. Pryda & Mouseville are solely for Eric’s own productions, vehicles to develop his sound a sound that has become so influential, constantly imitated and copied but yet to be bettered.
Therefore Pryda Friends was created to release friend’s productions as currently there was no other outlet for the growing list of tracks submitted to Eric by his close colleagues. Collaborations such as the hugely successful Paolo Mojo “1983” & Axer “123”/ “321” written with fellow Swede Axwell proved the worth of this new imprint.
Then just recently he became the first ever artist to be given the green light to sample Pink Floyd as his massive ‘Proper Education’ fused “Another Brick In The Wall’s” school choir chorus into a UK & European chart smash for Ministry of Sound. Eric has proven to be an artist that can actually fuse commercial success with underground success, something previously impossible to achieve and sustain.
It was always the enjoyment of working with music that kept Eric coming back for more. From making music on the piano aged 8 to convincing his parents to buy him a keyboard so he could make his own Depeche Mode tracks it was always “just a bit of fun.” However, with his debut artist album set to hit the world this summer, Eric’s key loves of house, techno and electro will see him bring all of his styles under one roof for the first time as his underground club roots come to the fore. A bonefide global chart smash in the making, it’s surprising just how far a bit of ‘fun’ can go.
Going back to 1994 Eric became the drummer in a synth band called ‘Enemy Alliance’, touring Sweden and dreaming of becoming the next Kraftwerk. He jacked his job in, hooked up with two friends who had a small studio set up making more pop based material and lived the next two years virtually penniless - working on his own hard-hitting, techno-funk tracks and DJing locally when gigs came up.
Eric’s first release came about almost by accident. Having made a bunch of new material solely on a Roland MC-505 Groovebox he gave a cassette to a friend who ran a clothing store in Stockholm. Eventually finding its way to the London offices of EMI’s New Religion, in 2000 they released ‘By Your Side’/Mr. Jingles’ and Eric was at last on the hallowed grooves of black vinyl.
After the success of that initial release, EMI moved Eric to their flagship dance label Credence. A remix of the boogie bassline driven ‘Mr Jingles’ together with two new tracks followed and ‘EP1’ formed the first of three hugely successful releases. By the time ‘EP3’ came around, Eric had developed into one of the hottest names in house music and the original version of ‘Slammin’ from EP3 became the biggest instrumental tune on Ibiza in the summer of 2003. As an in demand producer the remix offers were flying in. Defining moments like his work on fellow Swede Steve Angello’s ‘Voices’ & Woz Not Woz firmly established Eric’s trademark electronic sound and he went on to remix the likes of The Shapeshifter’s, Alter Ego, Pet Shop Boys and Switch to name but a few.
Then things went a bit crazy. A record that he made to play out for friends in Stockholm that sampled a vocal hook from Stevie Winwood’s ‘Valerie’ became a local club anthem off the back of just six dub plates. A year later in 2004 ‘Call On Me’ was out on Ministry of Sound’s Data imprint, topping half the national charts of Europe and remaining at number 1 for six weeks in the UK, generating sales of over 2.5 million units worldwide.
As Mouseville Records and Pryda Recordings continue to deliver the dancefloor goods, Eric Prydz is now one of the world’s most in demand underground spinners and producers. With is debut album and new single set to drop, the worlds of techno and house are in safe hands.
4Play happens Thursdays at Ultrabar – 18+
911 F St. NW Washington D.C.
Tickets & Info: www.clubglow.com Direct: 202.271.1171
Facebook: Glow Fan Page & “I Love Glow” Group // Myspace.com/clubglowdc
Twitter – ClubGlow // Blog: www.clubglow.com/blog
BECOME A “FAN OF GLOW” ON FACEBOOK AND GET THE BEST DISCOUNTS TO ALL GLOW AND 4PLAY EVENTS!!!
-Main Floor (House Progressive)
-Bedroom (Hip Hop, R&B, Mashups)
-Chroma (Reggae, Hip Hop)
- Basement (Hip Hop, Top40)