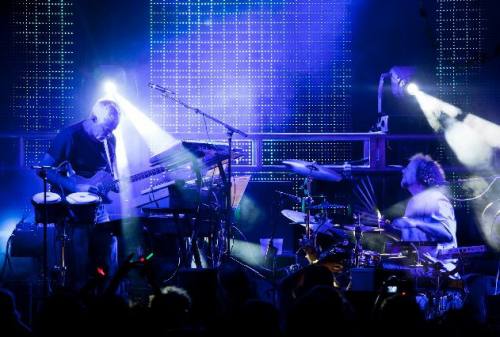 
From dance halls to intimate theaters worldwide comes EOTO - the nation’s top innovator in glitchy electronic, bass thumping, dub-step themed music. With performances booked well into 2010 including dates in Tucson, Albuquerque, San Diego and all along the western seaboard, EOTO is taking the country by storm with their innovative brand of live electronic music.


What EOTO achieves on stage is nothing short of astounding. Performed with all of the bells and whistles of a traditional electronic artist plus the addition of live drums, vocals, bass and guitar, the duo creates each and every bass ridden noise right before your eyes -without the addition of a single pre-recorded track. Known for their 100% live improvised performance, EOTO is breaking ground into a new sub culture of music while standing against some of the nations best live DJ’s in the country.


With leagues of sold-out theater performances in 2009, the project started out as an avenue for the duo to blow off steam and generally just have a good time playing around with technology with music. Now, a full time project for the pair with a seemingly endless tour featuring over 600 shows in 4 years and sold out performances in every market in the country. With no signs of stopping, EOTO fine-tunes their approach and skill with each and every show they play, leaving the next performance more unique then the last.


The project will be careening the countryside in 2010 with back-to-back performances scheduled well into late spring and festival dates booked swiftly behind it. The project will be playing along the mountain west and up the west coast before heading back to middle America, through the South, and over to the East Coast in support of their third release, Fire The Lazers, which is now available on iTunes or at a show near you.