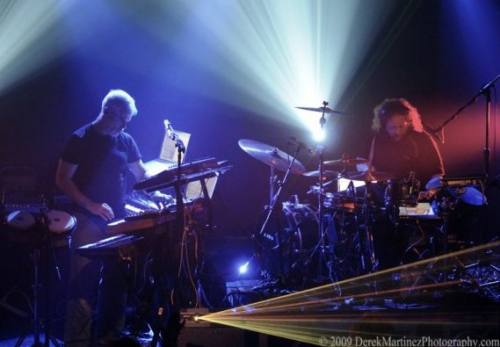 First 100 tickets sold $15, $20 thereafter
Juke Joint presents
EOTO
(Jason and Travis from String Cheese Incident)
idm / break beat / downtempo
Jason Hann and Michael Travis (percussionist and drummer from the band The String Cheese Incident) make up this 100% improvised live Breakbeat/ House/ Drum n Bass/ Trip Hop project. Drawing from the ethos of some of the great DJ's and computer artists of the world, they use cutting edge technology to create truly original and melodic dance music in the moment, with the undeniable power of live drums. The music is all created on the spot, recorded, then mixed and remixed LIVE to create an ever evolving musical experience. Since the project is 100% improvised, every night promises to be a unique dance experience. Hann and Travis play different roles in this band than in SCI. Jason plays the drum kit, percussion and sampler, while Travis is in charge of the tonal elements, playing bass, guitar, keyboards, as well as hand percussion and live mixing.
Michael Travis is a pioneer in the art of modern improvisational jam-rock drumming. He is especially known for his groundbreaking work on playing both hand drums and the drum kit simultaneously. As the drummer for the highly accomplished band, The String Cheese Incident, he has developed a unique style that is very supportive of a free jam aesthetic while still always laying it down. He further develops that approach in EOTO by being super solid to the point of emulating grooves that some of the best programmers and DJs would create, except with that elusive human feel. Travis has played along side some of the worlds greatest drummers while playing with String Cheese including Trilok Gurtu, Babatunde Olatunji, and Bill Kruetzman; & he has collaborated with many other artists including Keller Williams, Karl Denson, Steve Kimock, Warren Haynes, & Bela Fleck. With EOTO, he gets to stretch-out into brand-new territory; Handing over the rhythmic element to Jason, Trav is finally able to test out his melodic chops, playing the electric bass, electric guitar, keyboards, & samplers in addition to his EOTO mini-kit during the duo's spontaneous compositions.
Jason Hann is an accomplished composer/percussionist/ drummer who has been playing professionally since the age of 12. Growing up in Miami, Florida, he was exposed early to international music through his father, who is also a musician. Combined with his Colombian heritage through his mom, Jason grew up embracing rhythms from all parts of the globe. Music has taken him around the world, studying first hand in countries such as Mali, Ghana, Haiti, and Korea, both learning and performing folkloric and contemporary music of the land. A dynamic performer, Jason has also produced, composed, recorded, and toured internationally within many different genres of music including Rock, R&B, Pop, Hip Hop/Rap, Jazz, Latin, Latin-Jazz, Flamenco, African, Persian, Electronica, Techno, Brazilian, Indian and other fusions of World music. In addition to his current musical project EOTO, Jason has recently expressed his musical energy through The String Cheese Incident and each of his fellow band members' respective side-projects, through his solo electronica and all-percussion recordings, and through working with other artists such as Loreena McKinnet and Vinx . Jason continues to hit the road with legendary soul man Issac Hayes when possible. With a diverse background of musical collaborations that include Youssou N'Dour, Keller Williams, Rickie Lee Jones and Dr. Dre, it is evident that Jason will continue living in the musical moment for a long time to come.
along with...
HEAVY WEGHT DUB CHAMPION
dub / trip hop / electronica www.myspace.com/
heavyweightdubchampion
Sonic Shamanistic Alchemy - Founded in a log cabin at 9,000 feet in the mountains of Colorado, and now based in San Francisco, California, Heavyweight Dub Champion is a movement of interdimensional warriors representing the Army of the Last Champion. Firmly rooted in hip hop, dancehall, dub and electronic music, and performed on more than 50 channels of vintage analog and digital gear, HDC has gained much notoriety and a growing following from its high-intensity and visually captivating live performances. Founder and Last Champion Manifesto author Resurrector transcends space and time wielding an arsenal of deep revolutionary audio with support from a revolving crew of co-conspirators that include Totter Todd, Dr. Israel, A.P.O.S.T.L.E., Jillian Ann, MC Azeem and Stero-Lion. At the collective’s core is the universal intention of inspiration, mind expansion and transformation through creative expression - all of which manifests in their collective artistic performance known as The Liberation Process.
along with...
DJ MALARKEY