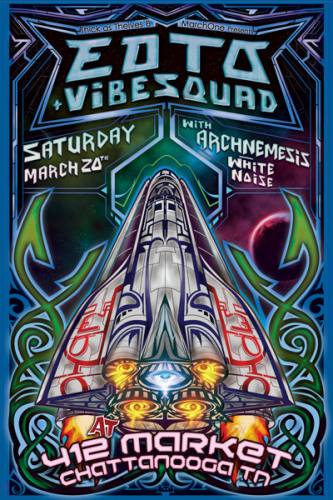 Eoto | 12:00am
While the genre of live electronica is relatively new on the music circuit, nobody is breaking the boundaries of live producing and improvisation like EOTO. Fusing elements of live instrumentation, house music, dubstep and electro into their dance ready sound, the band will be taking the country by storm beginning in late September for their perennial fall tour, performing 33 consecutive nights in a row.
Consisting of Michael Travis and Jason Hann the duo mixes the organic sounds of live drums, keyboards, vocals, bass, percussion, and guitar through a variety of programs and gadgets to create a style of music that is more likely found in a dance club, then a live music theater. What sets EOTO apart from other artists in this emerging genre is how the music is created. While some artists may spend hours pre-mixing samples and elements of music for their live show, EOTO uses nothing pre-recorded, giving them the ability to approach each song with on-the-spot spontaneity and 100% live improvisation.
VibeSquaD | 11:00pm
VibeSquad is the multi-personality brainchild of Aaron Holstein. With releases on NativeState, Proboscis, Interchill, Muti, and Sonic Dragon (Hong Kong) in 2007 alone VibeSquad is quickly emerging as a top producer in the west coast US electronic music scene. Both 2007 EPs "Return of The Pudding People" & "Songs to Accompany Dance Move: The Worm" have been making there way around the globe showing up in DJ’s sets and causing serious mayhem on dancefloors. Though his legendary live sets may cause whiplash and heart attacks in the unsuspecting bystander, those prepared to launch get much more than they bargained for. Aaron’s music defies typical genre-labels and covers tempos from slow ’n hard lowriding krunkadelics to mid-tempo barnstormers all in a seamlessly flowing soulful mash- dirty and beautiful as life itself. Aaron also plays bass/keys for the bands ZILLA (w/ Michael Travis & Jamie Janover) & SPORQUE (w/Ooah & Jamie Janover)
Archnemesis | 10:00pm
Formed as a musical brain child of Justin Aubuchon and Curt Heiny, Archnemesis (www.archnemesismusic.com) roots its sound in the self-coined term "Intelligent Electro-Crunk". Keeping to the true definition of the word, the musical "villain" of Archnemesis uses influences drawn from other projects they are involved in (Telepath, MO Theory) as well incorporating samples that range from timeless to modern day. By doing this, a sound is created that makes every night a unique musical experience. With their first album in the works and by keeping this approach of appealing to the masses with musical familiarity, Archnemesis is constantly gaining new young fans at every show and continually growing musically as they move forward.
White Noise | 9:00pm
Electronic - (Dance, Electro, Fidget, Dubstep, B-More, Tech, Downtempo, HipHop, Glitch)