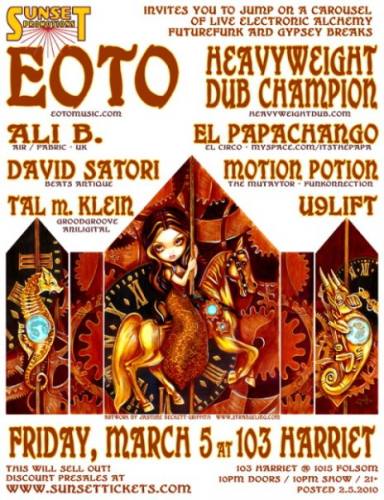 Artists:
EOTO (live set feat Michael Travis & Jason Hann) Heavyweight Dub Champion, Alib B (Fabric-UK) David Satori (Beats Antique)
Tal M Klein (Funkonnection, SF)
Motion Potion (Funkonnection, SF)
TICKETS: Discount tickets are limited. As they run out, the price will go up. Available at www.sunsettickets.com or call 415-256-8499
PRESS INFO: Kelly Edwards | bigger_bolder@yahoo.com
DETAILS: Catch a ride on the electronic caravan as it rolls through San Francisco on Friday March 5, making a stop at 103 Harriet. The big room will feature EOTO, an improvisational electronic project featuring Jason Hann and Michael Travis (formerly of String Cheese Incident). Bay Area dubwize superstar Heavyweight Dub Champion and David Satori (of Beats Antique) will round out the main room. The front room will feature a contrasting sound steeped in funky beats and old-school flavor. Ali B, whose Kiss FM and Fabric residencies have made him a household name in the UK will headline the room along with ubiquitous SF funky breaks stalwarts Tal M Klein and Motion Potion. The show goes on sale at $10 but the price will go up as tickets become more scarce and the date gets closer. For those craving a night of dancing to an eclectic blend of live, produced, and improvisational styles, look no further. This caravan is the one to catch.
EOTO: Jason Hann and Michael Travis (percussionist and drummer from the band The String Cheese Incident) make up this 100% improvised live Breakbeat/ House/ Drum 'n Bass/ Trip-Hop project. Drawing from the ethos of some of the great DJ's and computer artists of the world, they use cutting edge technology to create truly original and melodic dance music in the moment, with the undeniable power of live drums. The music is all created on the spot, recorded, then mixed and remixed LIVE to create an ever-evolving musical experience. Since the project is 100% improvised, every night promises to be a unique dance experience. Hann and Travis play different roles in this band than in SCI. Jason plays the drum kit, percussion and sampler, while Travis is in charge of the tonal elements, playing bass, guitar, keyboards, as well as hand percussion and live mixing.
Heavyweight Dub Champion: Sonic Shamanistic Alchemy - Founded in a log cabin at 9,000 feet in the mountains of Colorado, and now based in San Francisco, California, Heavyweight Dub Champion is a movement of interdimensional warriors representing the Army of the Last Champion. Firmly rooted in hip hop, dancehall, dub and electronic music, and performed on more than 50 channels of vintage analog and digital gear, the band has gained much notoriety and a growing following from its high-intensity and visually captivating live performances. Founder and Last Champion Manifesto author Resurrector transcends space and time wielding an arsenal of deep revolutionary audio with support from a revolving crew of co-conspirators that include Totter Todd, Dr. Israel, A.P.O.S.T.L.E, Jillian Ann, MC Azeem and Stero-Lion. At the collective’s core is the universal intention of inspiration, mind expansion and transformation through creative expression - all of which manifests in their collective artistic performance known as The Liberation Process.
Ali B & Tal M Klein: Living proof that the funk is alive and well in the new millennium, Ali B and Tal M Klein have taken very different paths to get to roughly the same place. Tal M Klein is the producer’s producer, a Bay Area studio rat who not only twiddles knobs, but plays several instruments in search of his aesthetic. Known to make everything from funky breaks, to Ital disco, to an electro-Big Mac commercial for McDonals, Klein still insists on playing only vinyl when he plays live, making him the Dj’s DJ as well. Ali B found his way to the limelight through his live reputation, earning a residency at London’s legendary Club Fabric through one smoking set. His output is tremendous, with a sixty-minute mix emerging on his Airrecordings blog on a weekly basis. The podcast has become a veritable chartlisting for those in search of the funkiest old-school dance-floor sounds.
Motion Potion: Motion Potion (RobbieKowal), called alternately the Dj for people who hate Djs (SFWeekly) and the "Swiss Army DJ", seems to have something for everyone. Funk impresario, mashup enthusiast, and live collaborator with such bands as Parliament-Funkadelic, the Mutaytor and Galactic. His career has been defined by an attempt to break down genre and scene barriers, playing every conceivable kind of music in the course of a night, a set, or a seven-minute mash-up. His own mix CD’s range wider than most label’s catalogs; live mixes that range from underground hip hop to electronic breaks to world fusion to rare southern rock.